I noticed a few weeks ago that the RNZAF is having their annual open day at Ohakea airbase on 16 March 2008. I have not been to one of these for many many years, so I think I might pop along this year.

The Airforce website indicates that the base will be open from 9am until 3pm [I understand that the displays start after 10am]. If you do go to the website, the "poster" indicates that an F-111 and a C-17 will be there, although no mention is made of these types lower down on the page. Even so, it looks like each RNZAF type will be present, as well as a range of interesting "civil" types, including a Spitfire, Trojan, DC3 and a couple of P-40's! Ok, so it's not Wanaka, but it should be good day. Oh yeah - admission, $10 family, $5 adult and $2 child.

It is possible to fly in, although I'm not sure that I will be doing that. If any of you are going to be there, and might want to meet up, leave a comment and we'll work out the logistics in the next week or so.

Here are a couple of "random" pictures I took today. The first is of a Gippsland GA8 [ZK-KBZ] in Wings Over Whales colours departing, the second of the Life Flight air ambulance [ZK-LFT] returning from Masterton and the third, a couple of likely lads "working hard" on the aero club hanger roof :-) 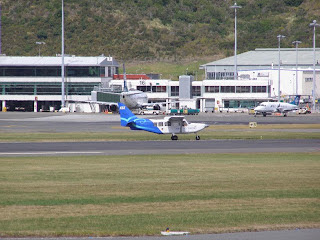 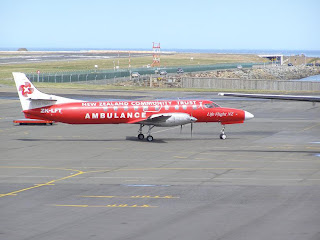 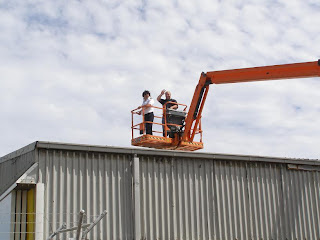 Posted by Rodney at Saturday, February 23, 2008 No comments:

The Cirrus SR22 is flying

Further to a previous post [http://flyinggeek.blogspot.com/2008/01/cirrus-sr22.html], New Zealand's latest Cirrus SR22, ZK-YUG, is now "up and running" so to speak. Here are a few photos of this beautiful aircraft. These were taken earlier today. I had a quick look inside the aircraft and it looks a stunner, and very comfortable. 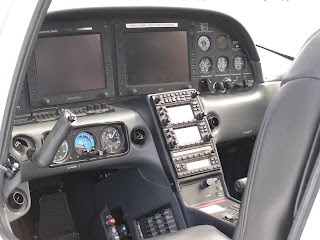 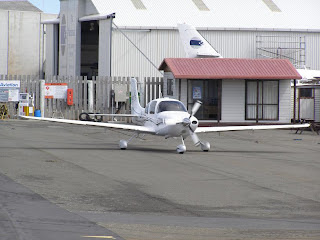 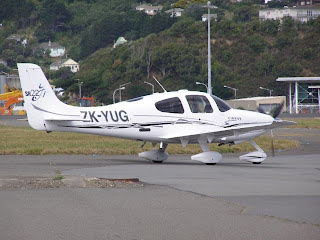 Wellington International Airport is looking for some new terminal buildings [apparantly to add to, not neccesarily to replace, existing buildings, although this is a little unclear at this stage]. What is clear however, is that the design was always going to be provocative and a little controversial.

Lead architect and project spokesman Nick Barratt-Boyes, speaking for the designers Studio Pacific Architecture and Warren and Mahoney, has jumped to the defence of the new buildings. Here's a link to one of the Dominion Post articles on this topic:

Assuming that the DomPost page is still up, you'll note a couple of things from the "artists impression". Firstly, the colour is aweful. According to the various articles out there, the colour should fade a bit over time, and I guess this means that it won't be quite as obnoxious.

Secondly [for those of your outside of Wellington], Singapore Airlines does not fly in to Wellington, and my guess is that they probably never will. Hopeful perhaps, or maybe the artist is based in Auckland? :-)

The new design has been variously described as "New Zealand's newest iconic building", "a shining star for our city's future", "attention-seeking and out of place", "confused and ugly" and "a 'lumpy' mix of The Flintstones and The Lord of the Rings".

Possibly my favourite comment is attributed to MP Peter Dunne who said: "If Wellingtonians got offended by other New Zealanders describing the stadium as a cake tin, they'll be even less impressed by the nicknames that are already floating around for the new terminal, which seem to focus largely on bovine residue."

My biggest concern is that within 5 years of being built, this design will appear somewhat dated and irrelevant to the majority of visitors [and locals].

My feeling is that there will be a bit of thinking going between the airport company and the architects to decide whether this should go ahead, and if so, are there are things that can be done to tone it down a little. I guess we'll see.
Posted by Rodney at Thursday, February 21, 2008 2 comments:

Email ThisBlogThis!Share to TwitterShare to FacebookShare to Pinterest
Labels: NZWN

These pictures are of an Aerospatiale AS 350B2 operated by Wanganui Aero Work. This was carrying a TV journalist reporting on today's tragic mid-air collision between a helicopter and a fixed wing aircraft over Paraparaumu. I understand that they didn't get much in the way of footage. 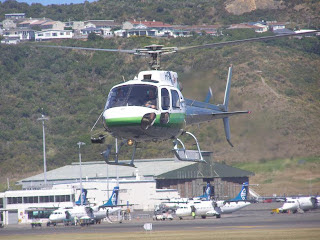 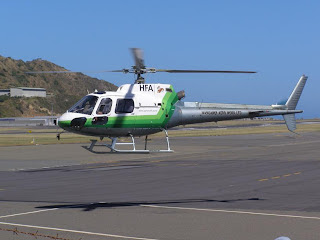 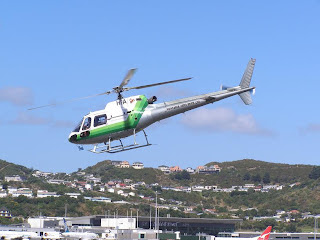 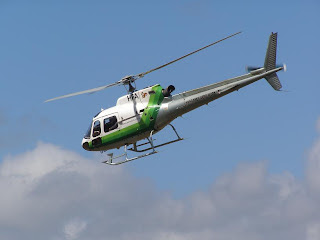 Following on from my posts from Ohakea Airbase, here are two pictures of an RNZAF Iroquois helicopters departing Wellington after a short visit. 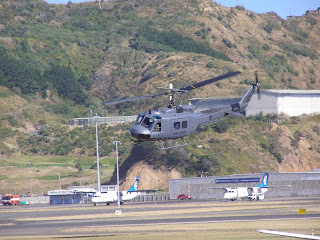 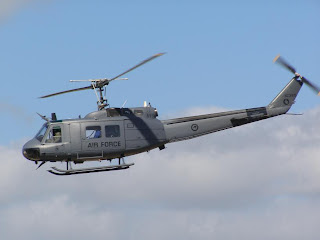 More from RNZAF Base Ohakea

Here is another picture from Ohakea Airbase; this time of three different aircraft. They are the Aermacchi MB339CB, the Beech B200 and the Iroquois helicopter. 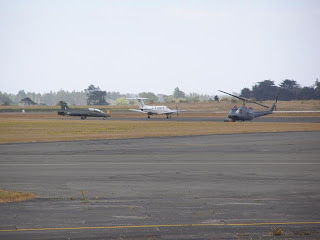 Posted by Rodney at Thursday, February 14, 2008 No comments:

And then they were cropped...

Further to my last post, I have cropped a couple of the pictures of the RNZAF Aermacchi MB339CB's as below. Still not great pictures, but better than nothing! Enjoy! 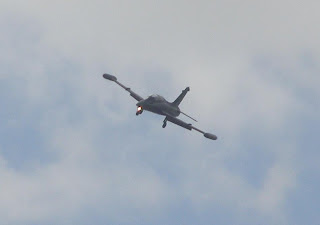 I've got a couple of days leave from work. Yippee! I was in the car coming back to Wellington earlier today, driving past Ohakea Airbase whn I saw something that got me very excited! A small jet appeared to be doing circuits!

Who could this be?

Maybe the Aussies have come over for a visit?

After getting the driver [my little sister visiting from England] to drive over to the viewing area, it did not take long to work out what was happenning. It had a Kiwi on the fuselage! Wow! Now this is a sight that I had not expected to see often, if at all, again!

It was two Aermacchi MB339CB aircraft buzzing the circuit doing touch-and-goes and various approaches and overshoots! Awesome! Yet another benefit of getting a couple of days of work!

Unfortunately my camera does not have an adequate lens to bring the aircraft up close and I was not able to do justice to what I saw. However, here are a few shots that I did manage to get. 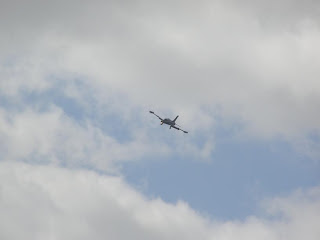 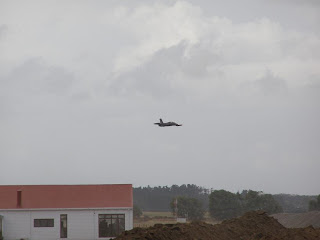 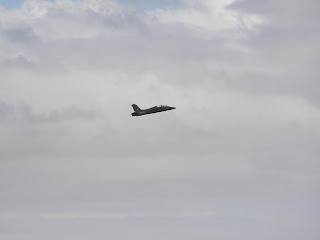 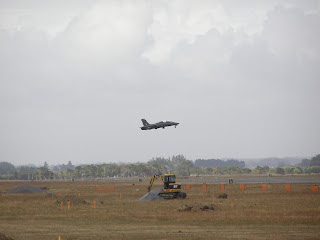 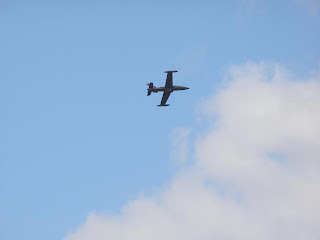 No, that title is not a typo... Here are my final two pictures of arrivals into Wellington today. The first is of a Dash 8 and the second of a Vincent Aviation Beech B1900C conducting circuit training. 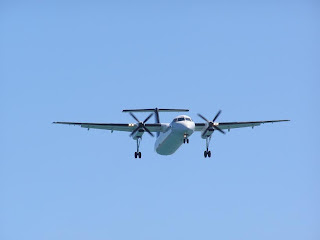 Continuing from my last post, here are pictures of some training flights on approach into Wellington.

One of the very good points about Wellington International Airport is that we still have two GA training organisations resident on the field. This is the Wellington Aero Club and another private training organisation. It is a real benefit being able to train in class C airspace, and getting used to Air Traffic Control [ATC - the "Tower"] and operating with a range of other aircraft types [given that I did my training at Ardmore, there are also benefits in training at a very busy unattended field!].

The first two pictures are of a Beech Skipper. Personally, the second image is not a sight I would like to see from the cockpit! Thankfully in this case it's an optical illusion given that the aircraft has passed well over the top of the wires and concrete wall! The third picture is of a Piper Arrow III from the Wellington Aero Club. 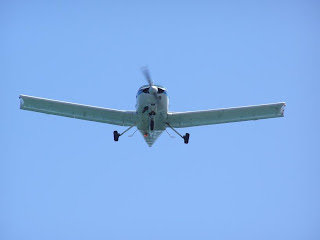 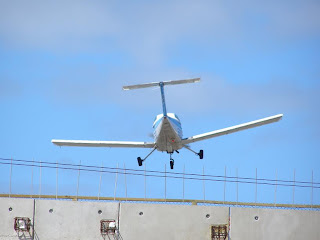 One of my favourite spots

Here are some pictures I took today of arrivals into Wellington from one of my favourite viewing locations, in Evans Bay. Evans Bay is at the northern end of the airfield and provides unobstructed views of the approach path [although no view of the landings or the departures - there are plenty of other good places for that!].

Here are some of the better photos I managed to snap. Top to bottom are: 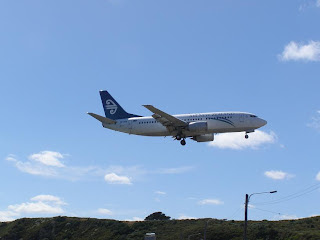 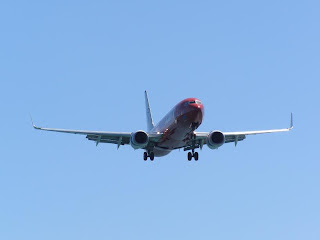 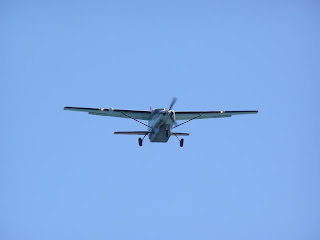 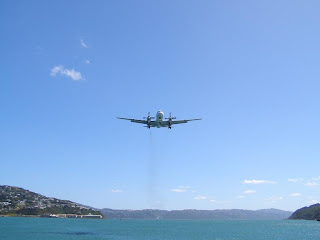 There has been nothing much happening over the weekend, but I did get a couple of OK shots.

The first is a General Dynamics Allison Convair 440/580 registered to Air Chathams Ltd. I never get sick of watching these aircraft come and go. It's one of the few airliners that can arrive with smoke out of the back of the engines and no fire engines waiting :-)

The second is an Aerospatiale AS 355 F1 registered to AV8 Helicopters Ltd based at Paraparaumu. 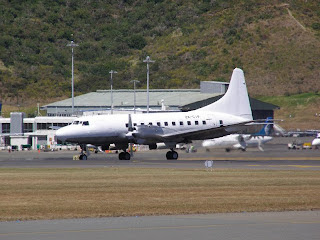