Must not fly again in January...

This evening's chariot was Wellington Aero Club's latest acquisition, Piper PA38-112 Tomahawk, ZK-EQX. What can I say. It is a Tomahawk. It flies like a Tomahawk. Take-off was fine, stalls were fun, turns good, landing about perfect.

Another weekend, another flight! Yesterday's flight was planned as a quick trip from Wellington to Palmerston North, across to the Wairarapa and back to Wellington. I had never flown into Palmerston North in daylight [I did a dual night cross country in there some years ago] and with the amazing weather we have had recently, well, why not!

All went well, until I had my entry clearance into the Wellington control zone... some spotted a drone flying around, which caused a few delays. For me, it meant diverting to Masterton for fuel and returning a little later than expected.

As for photos - these are courtesy of Ady who came along for the ride. Thanks for sharing!

These first few photos are from the University arrival into Palmerston North's runway 25 and the departure on a Hiwinui departure.. In the first photo, the airport is is in the centre of the photo.

Next up are some pictures heading south passing [what I think is] Eketahuna, with a couple of controlled burn-offs in progress. It's easy to see the wind direction and strength. A nice gentle northerly.

In the next photo, we are near Featherston [that's the town you can see in the photo], on the way to Mount Matthews, for our first attempt at getting into Wellington.

Next up are two photos approaching, then inside, the Orongorongo Valley. These were taken just before I had been given a control zone entry clearance, which was just prior to a drone was reported to be flying around. This meant a diversion to Masterton [which we had flown past earlier] for fuel. The Orongorongo Valley is where a lot of basic mountain flying training is undertaken by Wellington Aero Club.

After all that, we returned to Wellington a couple of hours later than expected. Still, it was a nice day to fly down the Wairarapa Valley and across Palliser Bay to return to Wellington.

Finally, if you were flying a drone/ RPAS* near Wellington Airport on Saturday... please don't. It is dangerous and highly disruptive. You could end up in prison... and they don't allow you to fly your drone in prison either 😬. Airshare.co.nz/ has some great information to help keep you out of trouble.

Nice [slow] trip in a Tomahawk

Last weekend I had a quick trip to Whanganui for a couple of hours.

The only aircraft that was available for the timeframe I wanted it was a Piper PA38-112 Tomahawk, ZK-FML. It's a nice machine [like all the PA38's operated by Wellington Aero Club]. I have good memories of learning to fly in the Tomahawk... but... it is a bit slower than what I usually fly these days.

For a Tomahawk, it's reasonably quick at around 95knots at normal cruise power, but that's still quite a bit slower than the C172 at around 110knots, and the CJ6A at 135knots. Still, there are worse ways to travel around 😃

Another reason for taking this aircraft is that it needed to be left at Paraparaumu airport [NZPP] that evening for some planned maintenance. So, on the way back, I stopped at NZPP and left it there. I was fortunate enough to find another pilot driving back to Wellington, so I didn't even need to get the train home [not that the train is a bad way to get home either...]. All up, it was 2.3 hours of flying [instead of well under 2 hours in any of the other aircraft] and a car ride back to Wellington.

While in NZPP I got a couple of photos on my phone. First up is ZK-FML all tied up the for evening.

Next up is the resident Aviat Aircraft A-1C-180 Husky, ZK-USK. This is operated by Kapiti Districts Aero Club on behalf of the owner and is a fabulous looking aircraft. Everyone who has flown it seems to rave about it also!

The last aircraft I photographed is definitely not a usual resident. It is a Cessna 208B Grand Caravan, ZK-MCL, which is operated by Milford Sounds Flights of a Queenstown address. Before you ask, I have no idea what it is doing up this way, but still a nice aircraft to see.

Anyway, that's the flying done for another day. Hopefully I have something this coming weekend. Something a bit faster and maybe across to a different island.

Posted by Rodney at Wednesday, January 26, 2022 No comments:

The flight home from Christchurch

I took a couple of photos on yesterday's return flight from Christchurch. It was a very nice day to be in the air - even nicer that I could sit back and relax.

Email ThisBlogThis!Share to TwitterShare to FacebookShare to Pinterest
Labels: Scenic

A visit to Christchurch

In what was my first commercial flight in over a year, I had a trip to Christchurch earlier today. The occasion was a Flying NZ executive team meeting [our first face-to-face meeting since the conference last year].

After the meeting a couple of us ended up in the Koru Lounge for a bite to eat and a quick drink. It was fairly quiet but the food was nice enough. This was about the first time I have taken my DSLR camera out of its bag in several months also. Both flights were with Air NZ on their ATR72's.

I'm glad they were booked on Air NZ instead of Jetstar, if only because Air NZ is still requiring vaccination passes, while Jetstar does not seem to be routinely checking for vaccination passes. I'd rather fly knowing the person sitting next to me is vaccinated, than not being sure... The statement from Jetstar's webpage [https://www.jetstar.com/nz/en/travel-alerts#Fly%20Well%20Program, as at 22 January 2022]:

Excuse me while I grab a pinch of salt to read that with...

Anyway, here are some photos from the Koru Lounge.

A fun time in Masterton

For the first time in many years, Wairarapa and Wellington Aero Clubs held an inter-club competition last Saturday. These used to happen regularly, but haven't for a few years now. There is even a rather large and impressive cup, the Liverton Cup, on offer.

The day consisted of three competitions taken from the excellent [I may be biased!] set of competitions run by Flying NZ for their regional and national competition events. We also used the relevant safety standards promulgated by Flying NZ, especially for the landing grid set-up and operations.

The three competitions were:

To give different people a fair go, there were three categories, Junior [student pilots], Senior [licenced pilots] and Special [CPL, instructors and other "special" people 😆]. It was a friendly get-together, with an emphasis on having fun and learning something and serving as an introduction to pilots from both clubs who had not experienced competitions before.

I had planned to spend most of my day running the landing grid... but I found out partway through the day that someone had entered me into the precision circuits and forced landing competitions. They also decided that I would also use the Nanchang CJ6A, ZK-MAO. Funny people.

As it turned out, I only had time for the forced landing competition. I flew it fairly well and had a lot of fun doing it. Rumour has it, I may have landed on the grid also, which was very helpful for the end result. 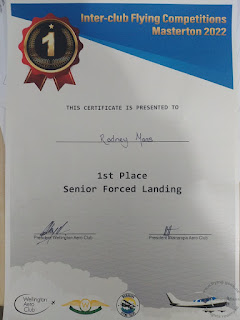 That might be the last time anyone enters me in a competition without asking first 😁.

Kiwi Coffee and Kai Catering provided delicious food in the afternoon and evening. Yum! Apparently they cater all over the place, and I'm sure Wairarapa Aero Club will be happy to have them back another day. The owners of the food truck came along for a ride in Wellington's Cessna 172N, ZK-EKE - a nice little 20 minute trip. Check out their FB page for some photos and video of the flight.

The Wairarapa Flying Tigers were out in force, providing rides in their two DH82A Tiger Moths. Very impressive machines, and I know everyone enjoyed their rides.

I signed up as a member of Flying Tigers a while ago, but being busy, yet again I managed to fail miserably at going for a ride. Sad. Another day.

Everyone had fun and I'm sure most people learnt something [I learnt that I should be more careful about applying sunscreen everywhere exposed... Grrrr!].

I actually had fun gliding the Nanchang onto the ground - that last 500' is always the fun bit. I also flew the Nanchang to/ from Wellington - again, good fun.

Congrats to Wairarapa Aero Club who took out the Liverton Cup this year. We'll be back next year to take it back!

Online now, and pictured resting in the hanger at our Wellington International Airport base. It has a magnificent paint scheme and looks very tidy all round. It's going to be a very popular addition to our fleet.

Are you interested in a trial flight [where you fly the plane!] in this or one of our other aircraft? Click here for Wellington Aero Club's trial flight information! 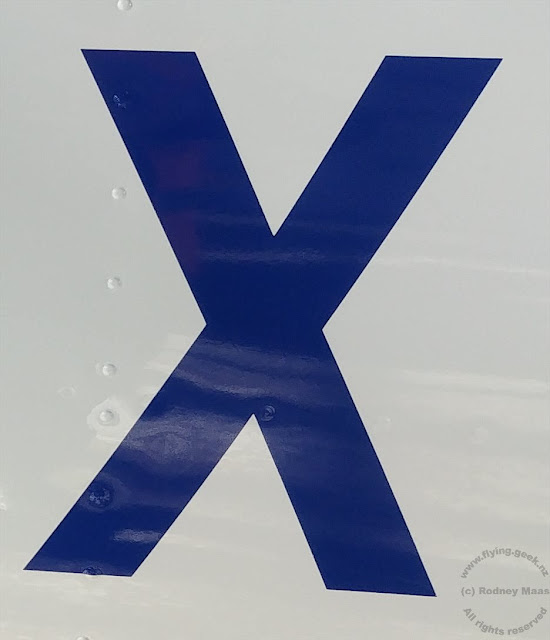 All the news next time! 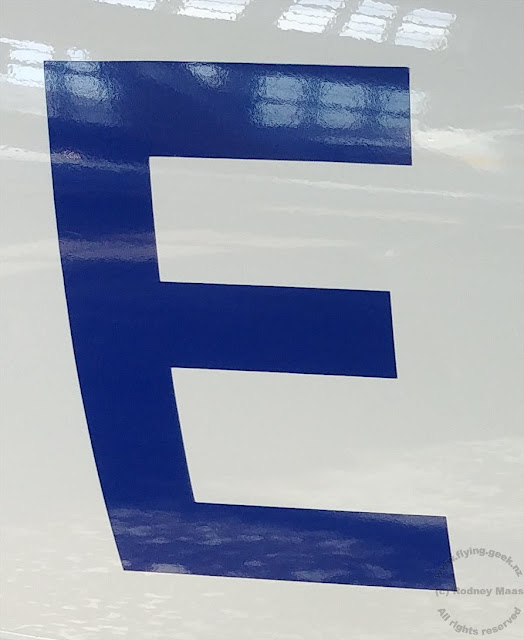 Here is a question for you...

I wonder what this could mean? 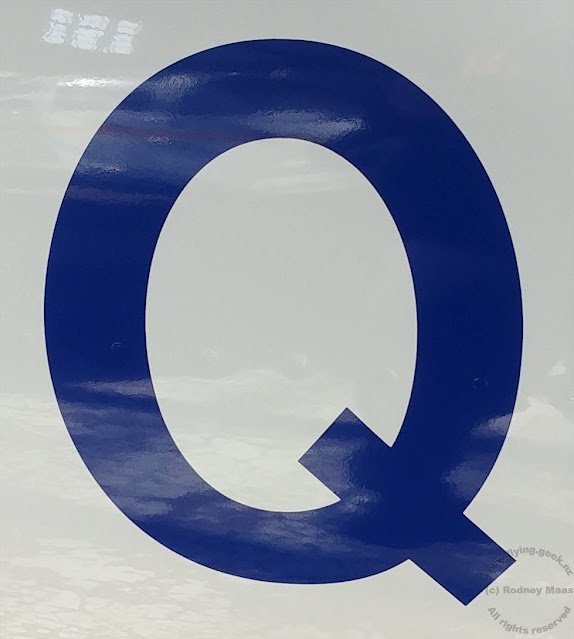 Posted by Rodney at Wednesday, January 12, 2022 No comments:

Guess where I got to this time?

Over to Masterton first thing Monday morning [well, a 10:15 arrival is close to first thing, right??] 😀

Following this I headed in the other direction - back south, past Wellington, across Cook Strait to Kaikoura. Home of the best seafood and whale watching available in New Zealand. If you do want to do some whale watching, best to do it with Air Kaikoura. You'll probably see more of these 🐳 and spend less time wondering where they are hiding!

The scenery on the way down is pretty awesome also. 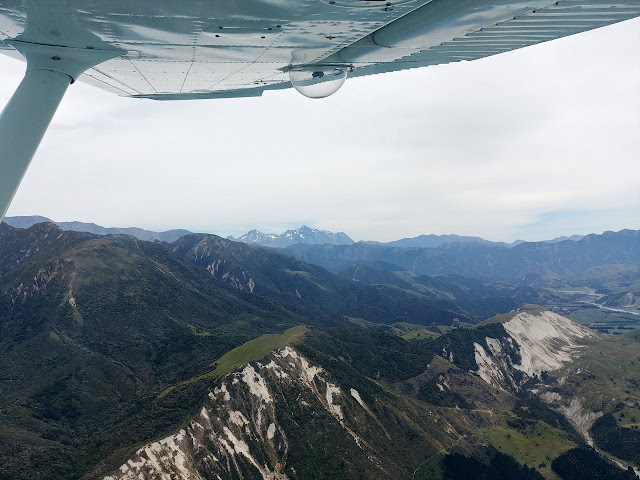 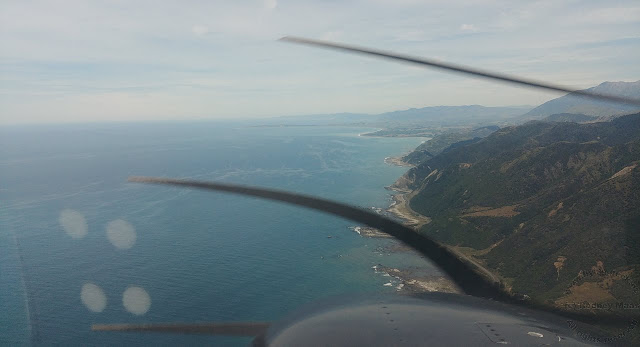 Just after take-off, on the way home and here is one of the most recognisable photos of Kaikoura - the peninsula. This would have to be a great place to live!

What else happened? With two crossings of Cook Strait, I made good use of the radar monitoring service provided by Airways NZ, and I reacquainted myself with the benefits of tuning into Christchurch Information to update my SARTIME [this is the time they start searching for me...] and my flight plan when the route home changed.

Another 3.2 hours of fun in the air and about 7.5 hours for the year so far. It has been an expensive start to the year! I might have to stay on the ground for a couple of days, although it is looking nice on Saturday...

The route... planned vs actual. 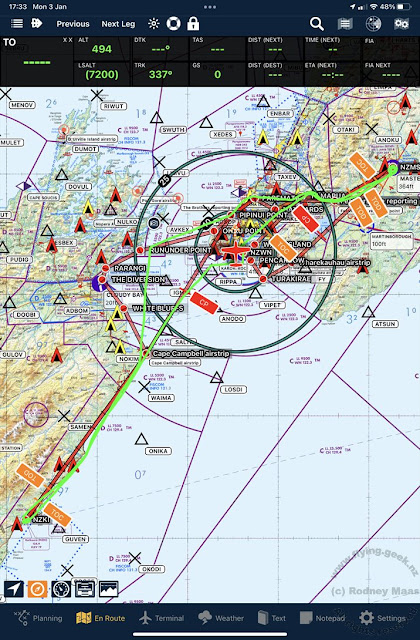 Sunday's big adventure was a half day of flying in the Nanchang, from Wellington to Nelson, to Westport, to Greymouth, to Hokitika, to Kaikoura and back to Wellington. I left around 11:30 and landed back in Wellington around 17:15.

Unfortunately I was a bit busy for photos [and enjoying to scenery to much anyway...!], so all I have is this screen shot from Avplan 😆 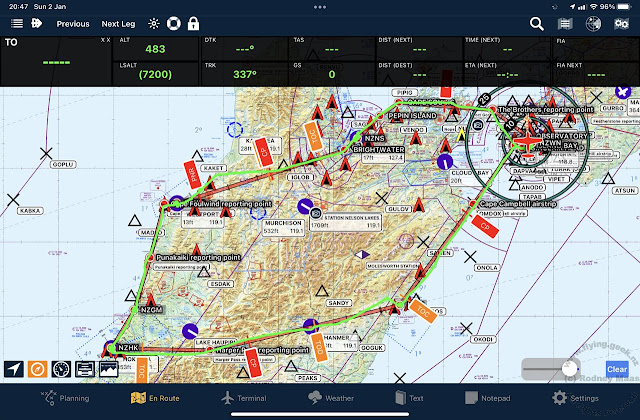 I have another flight on Monday, so hopefully some better photos from there!