It's well worth looking into if you want to keep up with the Club news. Click on the image to go direct to the blog.

Last night was the annual Wellington Aero Club dinner and prize giving. Like last year, it was held at The Pines, a function centre on Wellington's south coast. A fantastic location and highly recommended!

Here are a couple of pictures looking south from the deck of The Pines. The hills in the distance [behind the setting sun in the first picture] are from the South Island. 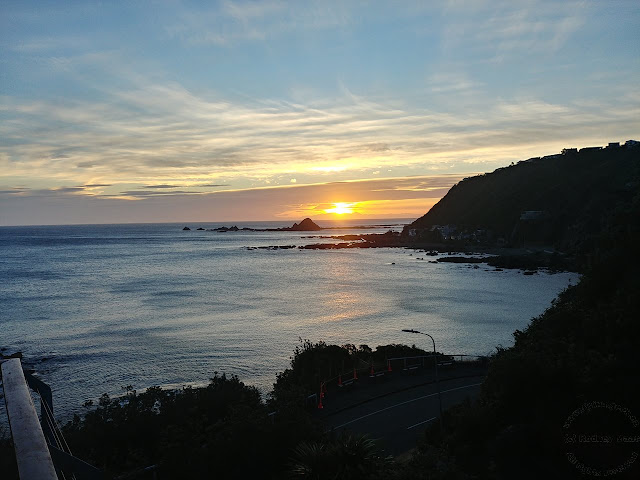 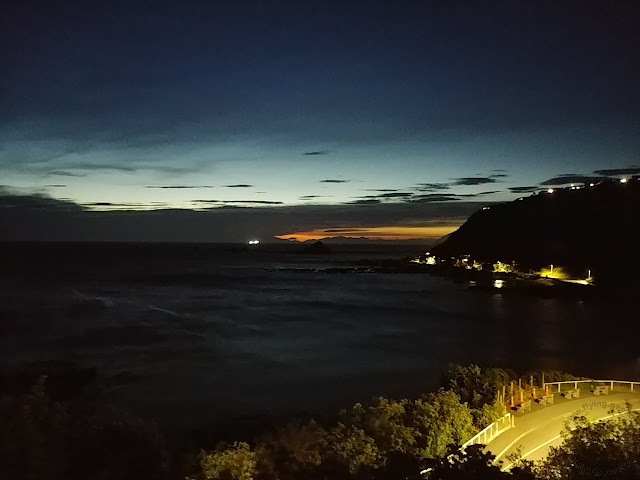 There was also the matter of the prize giving. A lot of worthy recipients, plus me 😁 For the second year in a row, I received the Instrument Flying Partial Panel trophy. Will it be three in a row? We will have to wait until next year and see. 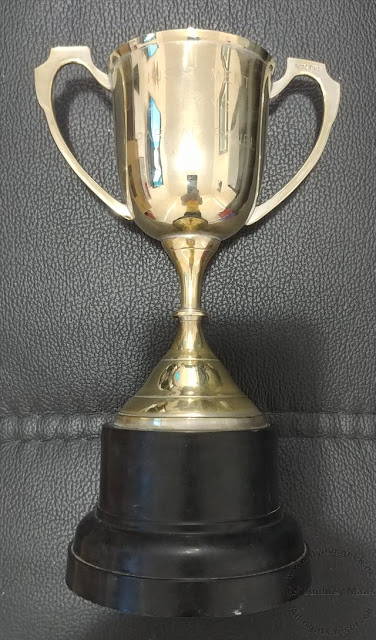 Posted by Rodney at Saturday, November 27, 2021 No comments:

A biplane version of the Hawker Hurricane...!

Every now and then I come across something that I never would have thought of and which is at the same time, ridiculous and very interesting.

This biplane conversion of the famous Hawker Hurricane would have to be one of those things. Add on the intention to be able to jettison the wing in flight. Almost unbelievable!

It sounds nuts, and basically was. I think this short video of what was now designated the Hillson FH.40 Slip Wing Hurricane says it best. Enjoy the next nine minutes! 😲

Posted by Rodney at Saturday, November 20, 2021 No comments:

This is a fairly good description of why I don't fly in clouds. Some of the comments, particularly at time 9:08, might be a little more focussed on airliners, but they are good none-the-less.

From position 9:40 until 10:38, it also provides a brief description of how I was controlling the aircraft during the recent Flying NZ regional competitions held in Whanganui 👍

Last weekend I was up in Whanganui for the Flying NZ Cook Strait region competitions.Unlike the previous four years, I wasn't the Competition Director [Thanks Leroy for doing that this year. Well done!], but I was given the role of Chief Ground Judge [so LOTS of time out on the landing grid], as well as competing in the Wigram Cup Basic Panel Instrument Flying competition.

A fun day and one that was well organised by Flying NZ and the Wanganui Aero Club.

For me, the weekend started with a flight to Whanganui in Wellington Aero Club's Cessna 172N, ZK-EKE on Friday. My competition was done in a Piper PA38-112 Tomahawk, ZK-TAW on Saturday and the flight home on Sunday was again in EKE.

I didn't get any pictures during the competitions - I was too busy with managing safety on the grid and ensuring the judging was up to standard, but I did get some on Saturday evening and on the flight home.

First up is the de Havilland DH112 Venom, ZK-VNM. This was pulled out of its hanger and turned some Jet A1 into noise and kinetic energy. Nice!

This Supermarine Aircraft Spitfire Mk 26 Replica, ZK-SPT, was pushed out of it's hanger to make room for the competition presentation dinner. What an awesome machine!

It looked great in the dark also!

I am always impressed at the quality of photos on my new iPad Mini 6. here are a couple as we passed over Paraparaumu airport and a cockpit photo of EKE.

Oh yeah... competition results. I managed a First Equal in my competition. I'm quite stocked with that! I guess the practice helped. Well done to Mads from HBECAC who was also first equal - a great guy and friendly rivalry [rumour has it, I might has tried to convince Mads that I was so bad, that he would win even if he didn't compete... 😁😁😁 ... didn't work!]. 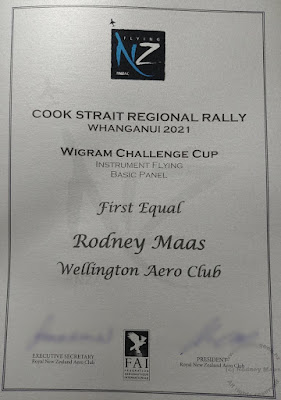 First flight in an electric aircraft!

Last week I had my first ever flight in a fully electric aircraft!

This aircraft is a Pipistrel Alpha Electro, ZK-EAL. This aircraft is registered to Electric Airline Ltd of a Lyttelton address. The previous week the aircraft had flown into Wellington, in what was the first flight of an electric aircraft across Cook Strait.

The aircraft itself essentially a re-engined Pipistrel Alpha, with the Rotax engine and fuel tank removed and an electric engine and a couple of battery packs [one in front of and one behind the cockpit] added.

It was easy enough to fly - apparently, someone who is familiar with the Rotax-powered Pipistrel Alpha would only need one flight to introduce the new engine and power management - everything else is the same.

It was a neat aircraft to fly. We cruised around at between 65 and 75 knots - a bit slower than what I am used to, but fine for what we were doing. It is of course a very light aircraft [MCTOW of 549 kgs] and so moves around in the air a bit - no different to any other LSA [such as the Tomark SD4 Viper I was rated in a few years ago]. It was also quite comfortable to sit in.

As for noise, my goodness, it is a quiet machine. The prop made a bit of noise [as expected] and there was a bit of a whistle out of the airframe when I got it out of balance, but yes, it is very very quiet.

The panel is laid out quite nicely with a mixture of digital and analogue instruments. In the following photograph, the right-hand panel is all about batteries and power usage.

The one big downside is that endurance is very limited - to the extent that I doubt it is currently useful in flight training [I know there will be different views on this!]. That's not a big issue - it's still a good aircraft and endurance will improve. This is the future for general aviation! It would be interesting to see it operated at an uncontrolled aerodrome with a take-off, vacate the circuit, climb to 3000' AGL, and undertake 4-6 stalls [or 2-3 FLWOP exercises for that matter], then return to the aerodrome.

As an example, at the start of my flight, the batteries were fully charged, and at the end [around 0.6 hours], down to 30%, which is roughly 30 minutes reserve. To be clear, there's no way I was flying it as efficiently as it could have been, but it is a limitation - one which will undoubtedly go away as battery technology is improved.

Anyway, here are a few photos with comments as appropriate.

This next picture is the recharging display in the aircraft. Included are displays showing the charge state, amperages, voltages and temperatures. Like other displays, it is easy to read and provides just the required information.

The front battery compartment. As you can see, this would be fairly easily removable if required. Just to the right of the big orange plug is a display showing the charge state and battery condition.

The seats are quite comfortable, and the four-point harness is also comfortable. The stick position and throttle have a nice feel to them also.

Front left to right are the throttle, brake [there are no toe brakes, but you really don't need them] and the flap handle. The brake handle might take a little to get used to, but is fine. I thought that the flap handle was a bit awkward to operate, but again, I guess it'd get easier with a bit of practice.

The brakes are interesting. There are no toe brakes, just the single brake lever as shown below. That's no problem, because with an approach speed of around 50 knots it doesnb't need much runway. When  the throttle is pulled right back, there is no thrust being generated and it comes to a stop quickly.

We only used the brakes twice during the flight - once at the holding point to stop us rolling backwards, and after the flight when I parked it up.

The electrical system is pretty simple. BAT EN followed by PWR EN switches on and the motor will run when the throttle is pushed forward. Simple!

Here is the ballistic parachute systems. This is located behind the right hand seat.

It is certainly a good looking machine!

Anyway, thanks to Electric Airline, and Andrew [the instructor] for the ride. Definitely a fun little machine and an indication of where things are headed.

Those of you keeping an eye on things will know that there are plans for 2-4 seat aircraft with 100 knot + speeds and around 3 hours endurance. I suspect that future is closer than we think. I can't wait [but I'll still fly the Nanchang!]!

Many of you will remember the TV series Ice Pilots. It is a series looking at Buffalo Airways, based in Yellowknife, NWT, Canada. This airline flies freight, and some passenger, flights in the frozen north of Canada. Buffalo Airways has a number of historic aircraft in its fleet, including the DC3, C-46, Lockheed Electra and the DC4!

Over the past moth or so, several episodes have been uploaded to Youtube, along with a number of other reality type series on different topics.

It's well worth a watch, especially for those of us who have found it hard to access this series in past years due to geographic restrictions on distribution.

Anyway, click here for the Buffalo Airways playlist and enjoy!

Posted by Rodney at Wednesday, November 03, 2021 No comments: