Yep, the wind got up a bit today - at least strong enough to stop any flight training. Better safe than sorry and we are coming into winter, so hardly surprising.

There were a few interesting visitors, from the light to the heavy end of the scale. Here are three examples.

First up is a Diamond DA40, ZK-MTA, registered to Massey University School of Aviation. Next up was a Beech B200C Super Kingair, ZK-FDR which is registered to Garden City Helicopters of Christchurch and is operated as an air ambulance. Lastly we have a Boeing 757-2K2, NZ7572, one of two operated by the RNZAF. 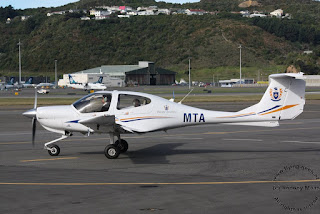 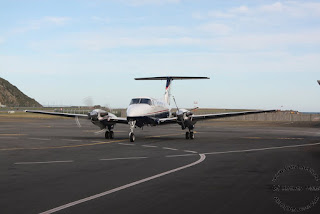 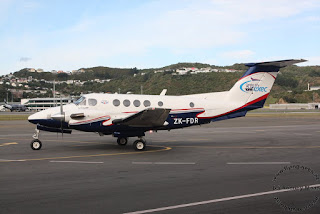 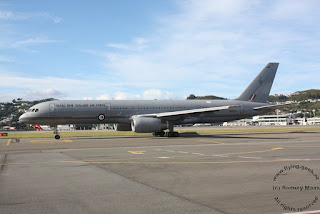 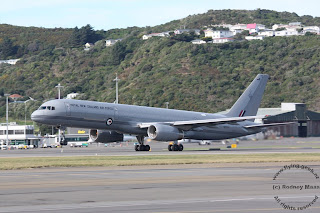 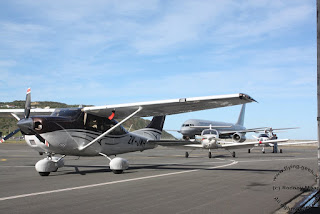 Today's weather has not been quite as good as yesterday, with no Club flying until this afternoon and just a few hours later it has started to drizzle.

Photos today are of one of the smallest "airliners" to operate through Wellington, a Piper PA34-220T Seneca, ZK-ZAG of Golden Bay Air, followed by a Cessna 208B Grand Caravan, ZK-SAA of Sounds Air. Finally we have an ATR-GIE ATR72-212A, ZK-MCW, of Mount Cook Airline/ Air NZ. 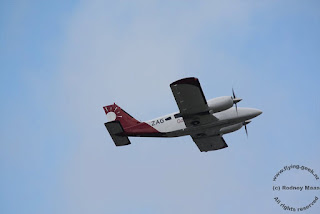 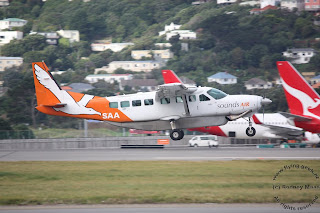 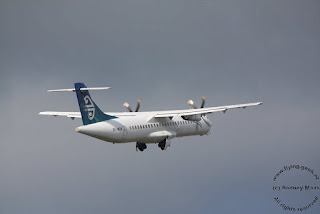 A great day for a flight!

If you've read my previous post, you'll know that the weather was not great this morning, but the forecast was for an improvement in the afternoon, which is just what happened. Furthermore, the surface wind was unusually light for Wellington [4-8 knots, about 7-15 km/hr] almost straight down the runway. Awesome!

Today's flight called for a bit of sightseeing, some simulated instrument flight [i/f - flying by instruments without looking outside] and to finish off with some circuits. To prevent me from cheating during the i/f, I was wearing a particularly fetching pair of "foggles" - basically goggles that have a translucent portion, so the outside view is obscured but the instruments are still visible.

The intelligent among you may have already realised that flying without looking where you are going is a wee bit like driving down a motorway with your eyes shut - not a great idea and bound to result in a big bang... for this reason it's a requirement to take a safety pilot, so thanks Pete for coming along and being just that!

I spent 30 minutes flying straight and level, doing some turns, climbing and descending, all without looking outside. Hard work, but good to know that my skills are not too rusty! After a bit of sightseeing we headed back to the airport and ended up with three circuits to practice takeoffs and landings [a fairly essential skill in this game].

Anyway, on to the pictures. First up is the flight's handsome pilot-in-command [yes, that's my best side...] with his fetching foggles, then the instrument panel and the view looking south-east over Lake Onoke and Lake Ferry township. Following this is Wellington City with the clouds at about 1500 feet, a example of a nice approach, and the last one where I was waaaaay too high [but that's what the Cessna's big flap is useful for]. Pete referred to it as the "space shuttle approach" [ie: really steep!]... NASA - I'm available! :-) 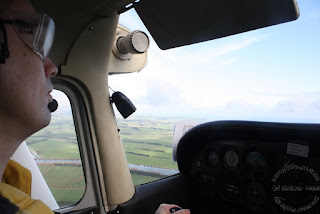 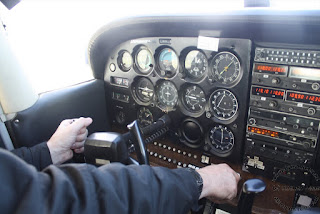 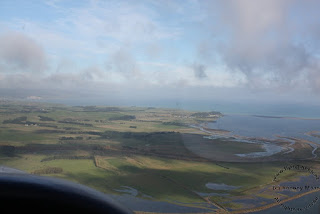 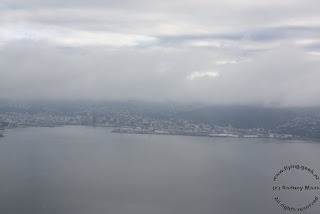 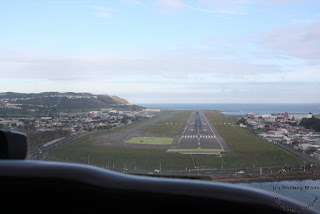 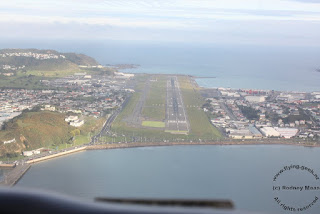 I had a flight booked this afternoon, but it wasn't looking good when the day dawned with low cloud and a wee bit cool [but by no means "cold"]. After a lazy start to the morning I headed out to the aero club to find, as expected, all aircraft parked up in the hanger. Stink!

Oh well, while waiting for the flight, I did get to see two unusual airline visitors to this side of the airport and a GA [General Aviation] visitor who arrived soon after the weather started clearing up.

The first airline visitor was this Eagle Airways/ Air NZ Beech/ Raytheon 1900D, ZK-EAI. The aircraft parked up outside of Vincent's maintenance base. I'm not 100% sure why it was here, but I later saw it was up on jacks, so perhaps an undercarriage problem?

The second airline visitor was an Air New Zealand Boeing B737-3U3, ZK-SJC. I didn't manage to get a photo as it was mostly hidden inside the the Execujet hanger, so probably undergoing unexpected maintenance of some sort. Can anyway confirm if this is the same aircraft that turned back the other day with a cracked windscreen?

The GA visitor was a Cessna 185C, ZK-CHL, registered to a Dannevirke address. Enjoy the photos and the next post will have the details of my flight. 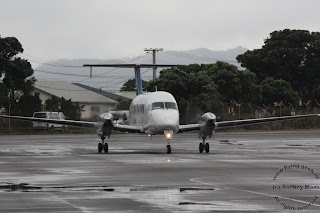 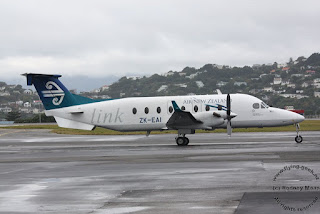 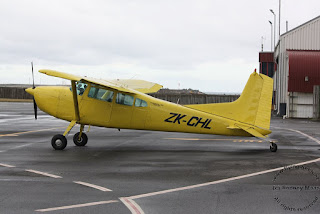 After the airliners, I was just about to leave when I saw this Cessna 650, N163JM, landing. I previously photographed this aircraft in November 2012 and it's good to see it again. Note in the first photo that the thrust reversers are deployed. 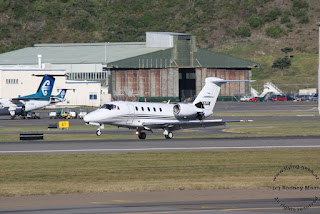 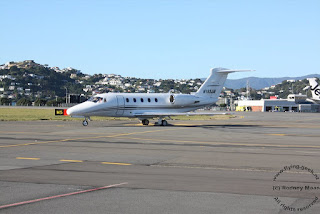 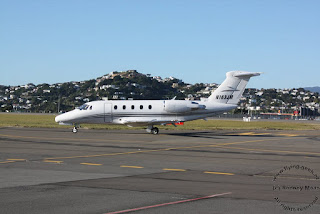 The weather has been fantastic today! I was going to flying... unfortunately the aircraft went unserviceable, and the other aircraft I could have flown was already booked. Still, it is great to see the aero club being very busy.

This left me to take a few photos. These included the following: 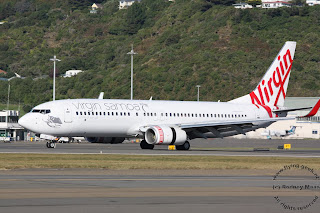 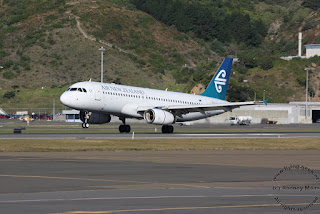 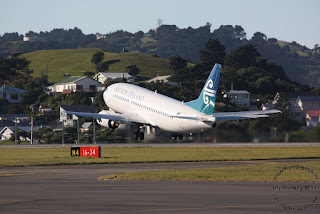 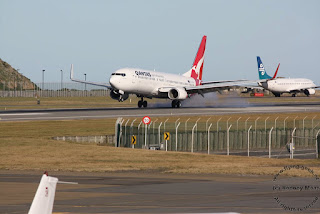 It has been another Sunday of lovely weather [unlike the forecast...]. I didn't get another flight in, but i have booked in for next Saturday - if I'm not pushed for time, I might make it a trip across Cook Strait to take a look at the Marlborough Sounds.

Anyway, here are two pictures of an Air New Zealand Airbus A320-232, ZK-OJH, in their 'Star Alliance' livery. 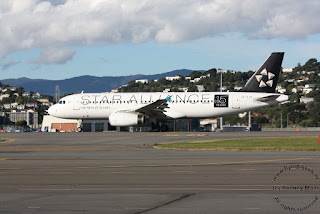 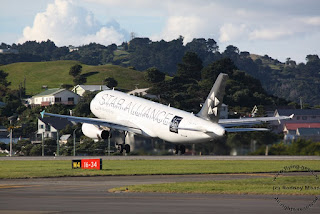 Finally... I got to go flying again!

After about 6 or 7 weeks of no flying, I finally got to go up again today in the Aero Club's Cessna 172N, ZK-FLT. It was a fairly quick flight to the north [over Petone], around the coast and back in around the south coast. The flight finished with some circuits to maintain competency.

The weather was pretty much perfect... virtually no turbulence apart from a little when I flew between a couple of hills which funnelled the gentle winds and provided a few lumps and bumps... nothing much though.

Anyway, here are some pictures. The first is the C172 [being flown by another Club pilot], then: 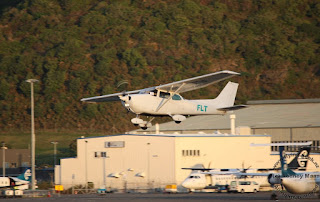 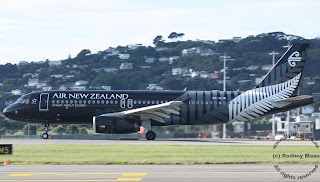