Today started much like yesterday ended - not much good for VFR flying, although there were a couple flights later in the day. The main activity today was the continuation of the refurbishment of the Club's "new" hanger facility.

Next weekend I'm planning on a trip down to Kaikoura for a quick look around, but we'll see what the weather has planned for the weekend first :-) 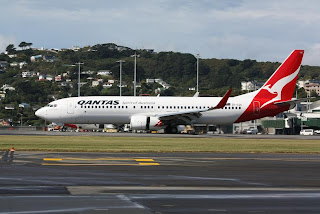 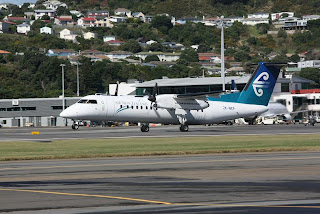 I was not planning to go flying today. Yesterday was a family wedding [no, not me!] and I got back to Wellington late this morning.

I went out to the aero club to relax ahead of a big [non aviation] day tomorrow, and to cut a long story short, ended up being asked to fly a Cessna C172L, ZK-DFI from Wellington [NZWN] to Parparaumu [NZPP], then bring back a Piper PA38-112 Tomahawk, ZK-TAW. Ummmm, ok!

No photos, so you'll just have the believe me when I say that it was a fantastic day to go flying... 30km plus visibility, very little wind, and sunshine all over!

Paraparaumu was interesting in that their sealed runway is being re-sealed, and so all operations were limited to grass run 34/ 16 which is only about 537 meters long. Plenty long enough for both aircraft though and, yes, I can remember how to do short field landings and takeoffs!
Posted by Rodney at Sunday, March 20, 2011 2 comments:

Today's pictures are of a USAF Boeing C17 Globemaster III, 03-3123 departing Wellington. Awesome! I'm not sure what the reason for the visit was. More photos on the MRC Aviation blog. 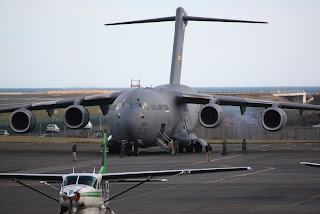 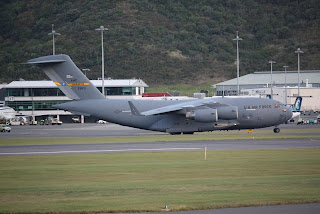 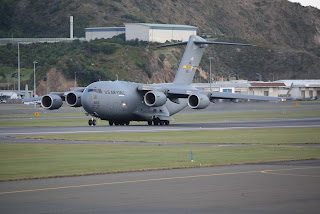 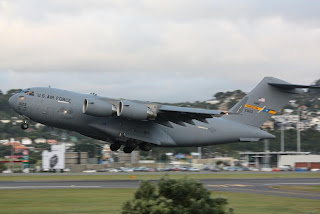 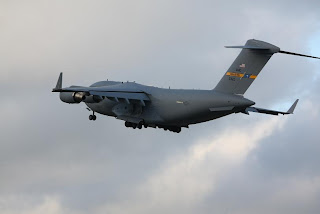 There was no flying for me today, although the weather was great and it was good to see a number of others able to take the opportunity.
A visitor today was this older Cessna 172F, ZK-CHN, registered to a Porirua address. This aircraft is clearly an older model with the venturis on the side [instead of an electrical vacuum pump], but looks nice enough having just had a quick wash.
Other news is that we've just had a very tasty dinner at the aero club, with one of our members raising money for a Christchurch earthquake appeal. A great dinner, and a great cause! Yum! You can always make money from pilots for a good cause, especially where there is food involved! 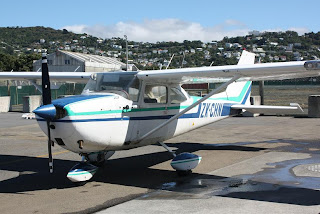 The club was due to go to D'Urville Island today for a visit, but that great idea got stomped on by this morning's weather. I really felt like going for a look around somewhere, so Blair and I jumped into the club's Cessna 172N, ZK-FLT and headed east to Palliser Bay.

Palliser Bay is is where many club training flights occur, but today we headed to the very eastern shoreline of Palliser Bay for a look around. This link to Google Maps shows the area we were in:

The following pictures show a small fraction of the scenery - the first looking south towards Cape Palliser and the remaining pictures are a couple of the smaller settlements in the area. Look closely at the photos and you'll see the problems the locals are having with erosion. 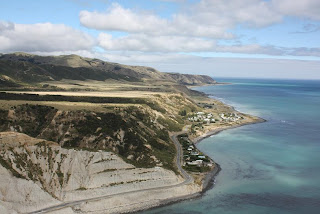 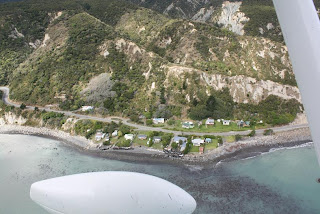 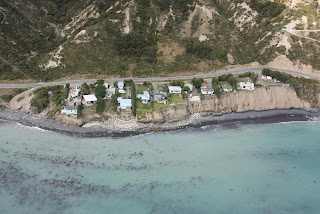 A couple of visitors at Wellington today were this Jetstar Airbus A320, VH-VGP with its Powderfinger livery, and a Robinson R44, ZK-HUT, registered to Rosco Contractors Ltd of a Reefton address. The passenger in the final photo is the Wizard of Christchurch, apparently off to entertain at a Christchurch earthquake fundraising event [in the helicopter]... 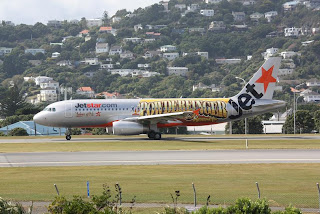 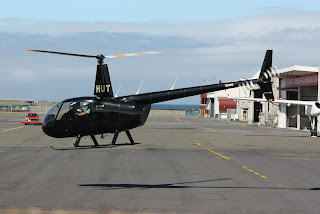 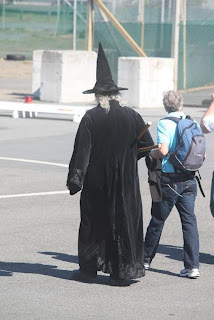 After the much-publicised visit of an Air New Zealand Boeing 777-319ER to Wellington a few weeks ago, they sent an aircraft in again earlier today. This was also on a tour to promote the aircraft to Air NZ's high-value customers [unfortunately I'm not one of them!]. ZK-OKM is pretty much a brand new aircraft, only appearing on the New Zealand register in late December.

The usual range of "larger" aircraft we get into Wellington, the Airbus A320's and Boeing B737's, look positively tiny next to this beast!

The first three photos are of the aircraft at gate 23, the second with a B737 [ZK-NGR] for a size comparison and the third with Air NZ's brand new A320, ZK-OAB, for comparison. Keep in mind that these aircraft only look this big as they are much closer to the camera than then B777!

The last image is after pushback, this time close to night time, hence the faded image.

After the images is the video I took on a cellphone of the aircraft taking off. It's amazing what you can do with a large airliner and 15 people on board, but still, this is incredible! Well under 1/2 the runway used and it climbed faster than any airliner I have seen here. Awesome! 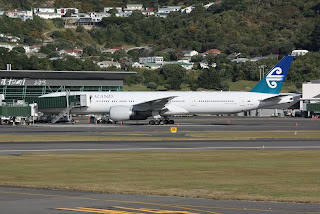 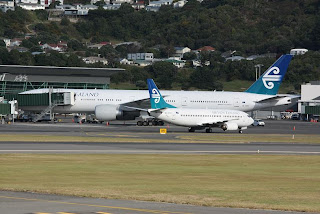 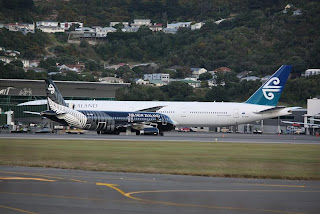 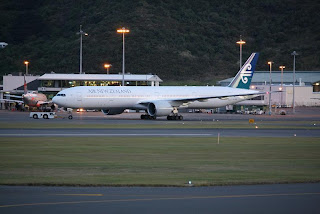 The old Club hanger is gone

Not too much happening at the Aero Club today due to the weather, and unfortunately, tomorrow is looking worse... just a photo of where the Club hanger used to be before the airport company took it over. It's an empty space now until a new facility is built [for another operator...]; such is life. 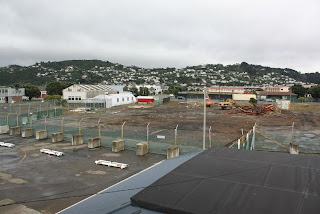 In this final post from my Auckland visit, I cover off a few of the New Zealand registered aircraft. Nothing much, but a couple of interesting movements. 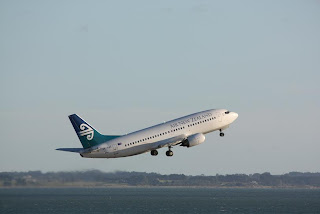 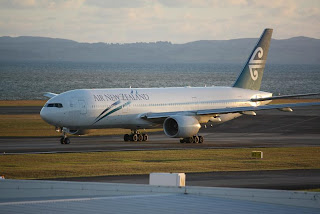 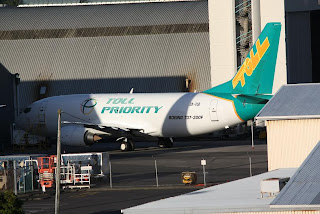 One of the big features of the visit though was all of the activity in the domestic terminal due to the earthquake in Christchurch. Estimates so far indicate around 50,000 people flown out of Christchurch [plus those who presumably drove or hitched a ride somehow]. Many of those people would have come to Auckland. Every few minutes there were announcements for passengers arriving from Christchurch, advising them of support services available in the terminal and of transport options.

The RNZAF and Air New Zealand [as well as other airlines and foreign Governments] have been doing a wonderful job in this situation. The RNZAF B757's have probably never worked harder, and, somehow, Air New Zealand has managed to fit in B747 and B777 domestic flights, plus additional B737 and A320 flights - all in all, thousands of extra seats every day.

One bit of good news [and I hope you don't mind me saying, somewhat humorous news] is a couple who drove their badly damaged vehicle from Christchurch, home to Waikanae. Dodgy to be sure, but good on them, and well done to the New Zealand Police for showing some discretion :-) Here's the link:
http://www.stuff.co.nz/dominion-post/news/4714752/Christchurch-to-Waikanae-in-a-wreck

The next pictures are of an RNZAF Boeing 757-200, NZ7572, landing, followed by an Air New Zealand Boeing 747-400, ZK-NBU landing from Christchurch and finally, the same aircraft parked up outside the domestic terminal. 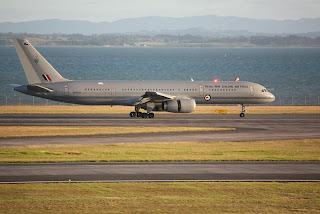 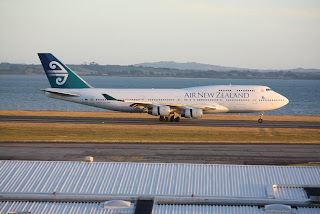 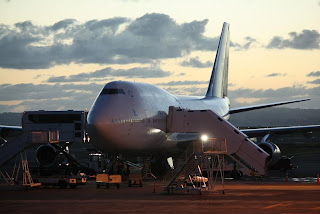 After the fun and games of catching up with people and going for a flight over Auckland, it was time to head back to Wellington. I made sure I got to Auckland International in plenty of time and took the opportunity to get a few snaps while I was there.

This first post contains a few pictures of international aircraft. Top to bottom are: 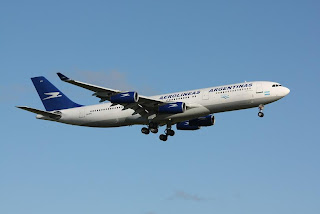 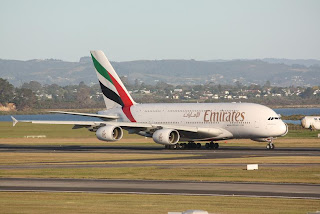 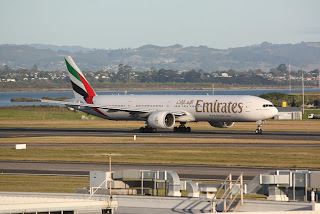 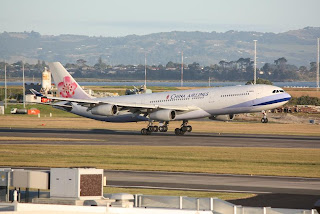 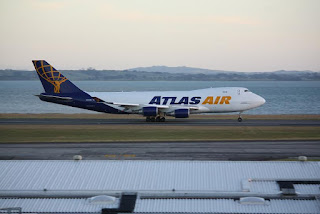