A fairly cryptic title I suppose, but very relevant to this post, as I had my first flight in a Piper J3C-50 Cub, ZK-AHD last weekend! What a fantastic experience!

This aircraft is operated by the Wairarapa Flying Tigers, alongside their Tiger Moths, and DHC Chipmunk [although this is awaiting servicing at the moment]. It is powered by a Continental A50, developing a massive 50hp* and has a max all up weight of 498 kgs. Definitely the lightest aircraft I have every flown and very definitely the lowest powered, by a long shot. Climb is a sprightly 60-65mph [no, not knots] and stall is about 35mph.

The panel is appropriately vintage as well

What a fantastic and fun machine it was to fly!

For this first lesson, it was turns, basic stalls, slow flight, an overhead rejoin and some circuits including 3 pointer landings and a wheeler landing. We actually tried two wheeler landings, but one was so bad, I went around. Fun times!!

The aircraft was flown with the door open [as I suppose a Cub should be flown...😁]. The speeds are quite sedate which provides more time to think about this, but with just under an hour in the seat today, there is certainly still more work to be done before I'm competent to take it up myself.

Fun times, and I'm definitely going back for more!

My understanding is that after a Cub rating, there may be an opportunity to do a Tiger Moth rating. That would be fun also!

* 50hp would be a similar number of horses as I have years... low power, young years? 😁

Yesterday I went on a trip to Masterton. I flew the Nanchang CJ6A, ZK-MAO, over there and back. In between times, I had a nice meal at the Kittyhawke cafe.

I also got to see these two de Havilland DH82A Tiger Moths, ZK-ANL and ZK-BEW, starting up for a flight. One day 👍

It is great to see these awesome aircraft still being used regularly. There's even a chance I may end up flying them one day. Stay tuned.

They are also available for joy rides if you are interested. Wairarapa Flying Tigers is the place to go to find out more.

A quick trip to Paraparaumu

I was not planning to do any flying on Sunday, and I didn't. I did however sit on board as a passenger as the Club's Piper PA38-112, ZK-EQX, was flown to Paraparaumu for some planned maintenance.

Not much to say about the flight, except it was a bit windy in Wellington, but surprisingly nice in Paraparaumu. Anyway, here are a couple of pictures.

The weather yesterday was just about exceptional. There was little wind, the skies were fairly blue apart from some high cloud through the Desert Road, with just a wee bit of anti-cyclonic gloom [see, I sound fancy!] limiting the visibility down to around 20-30 km in places.

Knowing that there was likely to be very nice weather a few days out, I booked the Nanchang CJ6A for most of the day, and planned a trip from Wellington to Taupō and return. Originally, I was going up the coast to near Whanganui, then up the Desert Road, then returning back via Masterton. The return trip changed for reasons I'll explain later.

The first change was that I flew into Whanganui for fuel. The Nanchang only has 2.5 hours endurance. Given a legal minimum reserve of 30 minutes, we are down to 2 hours flight time. With the Club [sensibly] wanting an extra 15 minutes reserve, we are down to 1 hour and 45 minutes. The flight was planned for 1 hour and 28 minutes, so quite doable. That anti-cyclonic gloom I mentioned? Probably better to have a few more minutes reserve up my sleeve, so I popped into Whanganui for fuel. Hello Jonathan and Zac.

Turns out it was all no problem. It all cleared up as I got closer to Waiouru. Still, I'm never heard anyone complain about having more fuel than they needed to have at the end of a flight.

Taupō is a great aerodrome to visit any day. The cafe in the terminal is always a great place to stop and have a snack. Also, hello Anthony and Alex. Bacon butty and Pepsi Max - the lunch of Kings! 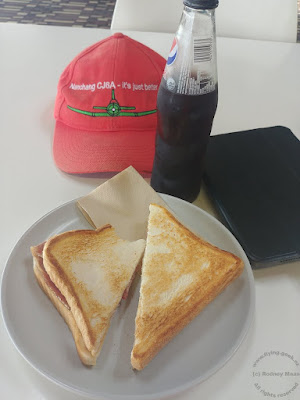 It was then that a small issue was found. I use an iPad Mini 6 for my aeronautical charts and navigation planning. It works great, but on longer flights may need a recharge. I have a backup that is usable [on the phone], but it's not ideal.

As it turns out, the cable I selected has a feature. It charges the phone but not the iPad??!?. So, rather than fly through some less familiar airspace, I came back via the same route [but without stopping in Whanganui]. Home in around 90 minutes, and the iPad had plenty of juice for the entire flight [and would have for the original plan... but you know... threat and error management and all that]. Also, NZWU and NZPP available should I have been concerned about fuel [which wasn't an issue].

The naughty cable now has two new features - after confirming that others cables work fine, I chopped the ends off and have ordered some replacements. I guess that just goes to show the importance of testing equipment before I head off..