Anyway, for the last post of the year, here are a couple of photos - two from today and one of the lovely orange sunset last night. Remember to click on the photos for bigger versions. 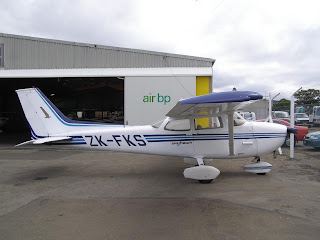 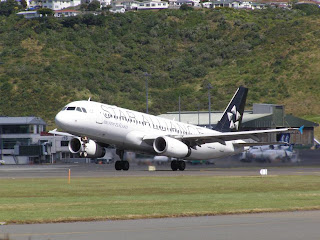 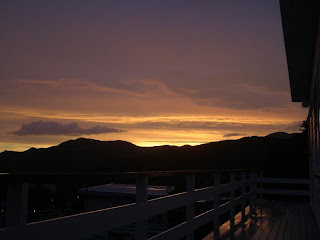 I'm having a Christmas/ New Year break at the moment and so I spent most of the day down at the aero club :-). I know, hard to believe...!

I wasn't planning on flying but then found out that I had a small surplus in my flying account; the temptation got the better of me!

I took a Piper Tomahawk PA38-112 up for 30 minutes of circuits. Some people think that Wellington has lots of delays for us lighties, and certainly it pays to avoid the "rush" periods, but that 30 minutes [on the hobbs] included 2 touch and goes, an approach and overshoot and the final landing. I also had a couple of orbits thrown in for separation reasons, so in reality it can be pretty good. 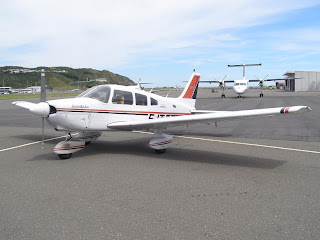 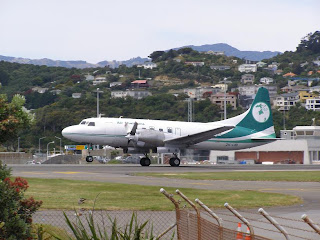 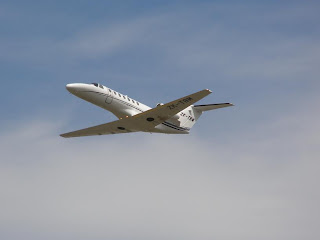 I popped out to the aero club again earlier today, and spotted an Armee de L'Air CASA CN-235. I went to take some photos, only to see the battery warning light come on on the camera display. Stink!

I did manage to get a shot of the aircraft taxiing, but the screen went blank just as I was pushing the shutter for the takeoff picture... you'll just have to use your imagination :-)

Anyway, here's one I did get. Taking a look at the paint, It looks particularly rough, especially compared to some other pictures of this type I have. 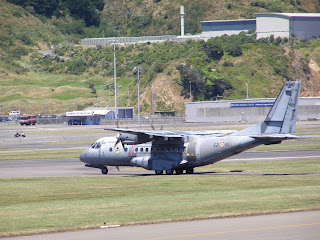 I've just arrived back in Wellington after a few days away over Christmas. No flying unfortunately, but I did snap a quick picture of some of the Kapiti Aero Club fleet at Paraparaumu.I was not able to get in for a closer look - there was a Gone Flying notice on the door :-) 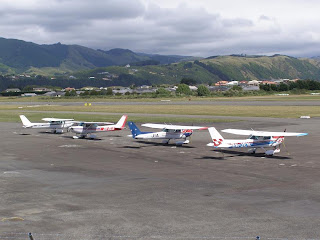 Posted by Rodney at Saturday, December 27, 2008 No comments:

Thanks for all of your visits, comments and contributions over the past 12 months!

Next year is sure to be another good one. Already I'm looking forward to the first airshow at Masterton/Hood aerodrome - there's sure to be a bunch of pictures.

Anyway, enjoy your Christmas break and we'll meet again in the new year!
Posted by Rodney at Monday, December 22, 2008 5 comments:

The biennial Wings Over Wairarapa airshow is to be held at Masterton [Hood] Aerodrome on 17 & 18 January 2009 [this happens to be the Wellington Anniversary Day holiday]!

I went to this show last time it was held 2 years ago, and thoroughly enjoyed myself. I'd certainly recommend it this time around!

I've had a look at the website [http://www.wings.org.nz/] and it looks like a very exciting show is planned. In addition to a range of World War One, World War Two and inter-war aircraft, there will be displays by the Royal New Zealand Air Force, and a range of other post-war designs. The website indicates that over 70 aircraft types will be participating in the display over the 2 days!

A highlight this time around is certain to be Doug Brooker's two-seat Spitfire Mk 1X. In fact, the website indicates that there may be a second Spitfire in attendance if the engineers can finish the restoration in time. Wow!!!

Check out the website for more details including entry costs and how to get there.
Posted by Rodney at Saturday, December 20, 2008 4 comments:

Something a little different

It's been a wet and windy day at Wellington, so not much flying. In fact, it's been one of the quietest weekends at Wellington that I've seen. I did get a couple of photos though.

The first is a Piper PA28-140, ZK-CUA. This aircraft is registered to Canterbury Aero Club. I strongly suspect that it is a leased machine as it's not in the usual CAC red, black and white scheme.

The second is a Kawasaki BK-117. ZK-HAW is registered to Helilink in Auckland and appeared to be filling in for the usual bright red and yellow Westpac Rescue helicopter.

The final picture is a photo of... a Microsoft flight simulator screen at the Aero Club. We've just put in a very simple setup with control column, rudder pedals and throttle quadrant and even an intercom. The projector helps with the enjoyment factor a lot. The "aircraft" is an Air Nelson [Air New Zealand] Dash 8. 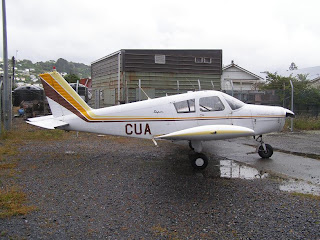 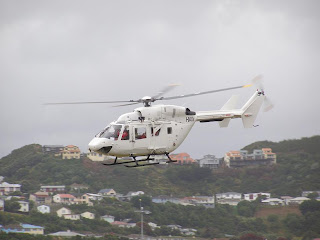 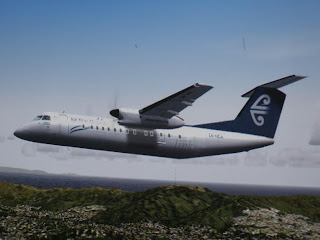 Posted by Rodney at Saturday, December 20, 2008 No comments:

Here are a couple of [old] famous quotes related to aviation...

"There will never be a bigger plane built." -- [Allegedly] a Boeing engineer, after the first flight of the model 247, a twin engine plane that holds ten people.

Email ThisBlogThis!Share to TwitterShare to FacebookShare to Pinterest
Labels: Joke

I don't have any further details on these fine looking aircraft [including people or the reasons for their visits], so feel free to update us all if you have any information. 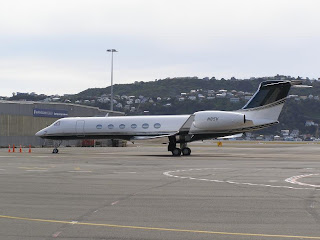 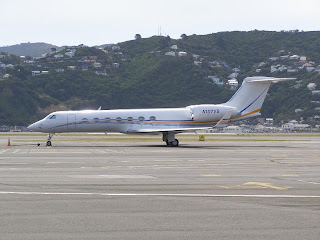 Thanks to Mike of MRC Aviation for the heads up on their arrival!
Posted by Rodney at Sunday, December 14, 2008 No comments:

A couple of other bloggers gave me a heads up on some expected visitors to Wellington over the weekend. I did see what looked like a Gulfstream GIV in the distance, but I was not able to get a decent photo. I did however manage to get an OK photo of a Qantas Boeing B737-838 taxying then getting airborne. VH-VXA has been registered to Qantas since December 2000.

Apart from that it has been [another] nice Saturday for flying with a lot of the Club trainers up and flying around which is good to see. Unfortunately this did not include me - the bank balance says "No" :-( 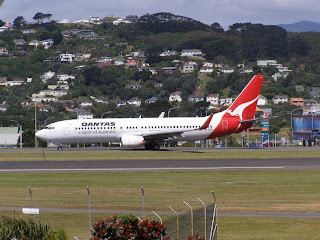 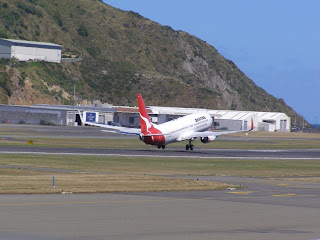 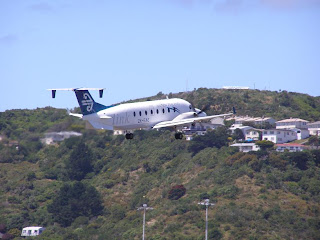 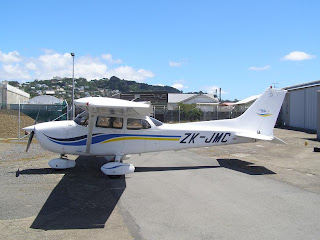 What a FANTASTIC day!

Wow! What a day it was today!

The weather was exactly as forecast, with very little cloud and light winds - a perfect day to go flying... twice. The first flight was included two workmates plus the son of one of them. For those that know Wellington, we performed a 16 Sinclair Departure [leaving to the south-west], around the western coastline, past by Mana Island, then to Paramata and an Eastbourne Arrival [arriving from the north-east].

The second flight was the same route with some other friends.

In both cases, it was as smooth as can be. Visibility was around the 30-40 km range. Everyone seemed to enjoy themselves, which, apart from a safe and legal flight, is most important.

One comment that cropped up from both flights [and comes up in many flights] is just how different things look from the air. I guess that perhaps us pilots can sometimes take this for granted so it's good to get a reminder every now and then.

Unfortunately there were no photos from the flights [the passengers on the first flight forgot while admiring the scenery - that speaks volumes by itself I guess! The photos from the second didn't turn out well enough].

I did get a few snaps of other aircraft though. The first is a Cessna C172M of Taupo Air Services, ZK-DHU. I understand that the pilot was here on a training flight. The second is a Piper PA28-236 Dakota, ZK-EQQ, registered to Air Hawkes Bay. The last is a another [from a 30 November post] picture of ZK-DGI a Piper PA28-140 of a Nelson address. 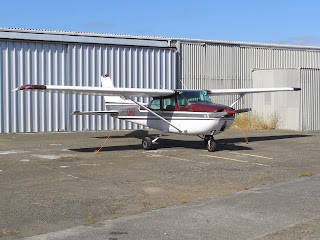 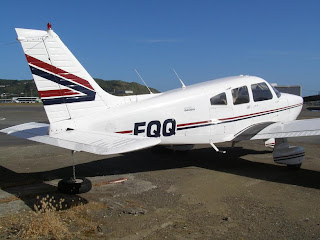 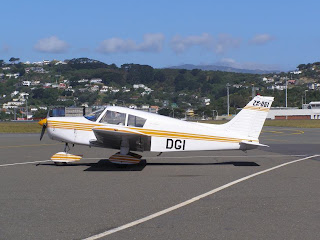 Posted by Rodney at Saturday, December 06, 2008 No comments:

Half a day means the pilot can play!

I had a half day at work today, so I took the opportunity to pop down to the aero club during the day. I'm not usually at the club on weekdays, so it's good to see how different things are. At times the airport seemed much busier than on weekends.

I spotted a couple of interesting aircraft. The first is a Cessna 421 Golden Eagle. ZK-TRC is registered to Air Manawatu and is often used for aero-medical missions.

Second aircraft is an Air New Zealand Airbus A320, ZK-OJA is painted in the Star Alliance promotional scheme. Interestingly, this aircraft had performed a low-level go around a short time earlier - it's a shame I didn't get any pictures, but it sure looked good!

Last pictures are a Gulfstream GIV-X parked on the western apron. N851GG is registered to a California, USA address. It appears to have been registered on 18 July 2008, so it's quite a new aircraft. 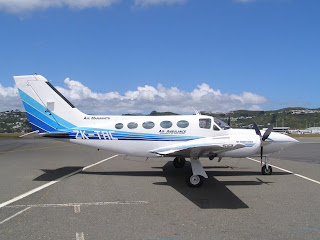 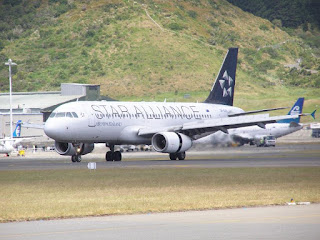 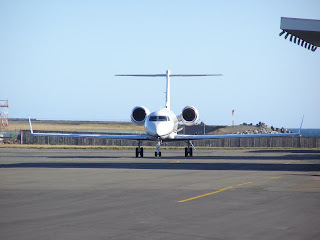 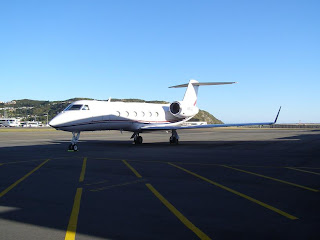 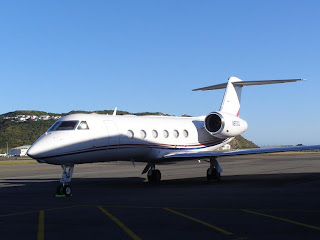 A little diversion - to Fiji

While sitting in Wellington "enjoying" the highly variable weather, a fellow Wellington Aero Club member was enjoying a few days in the sun in Fiji.

Bill was good enough to take a few photos of the Air Pacific Boeing B747-400 at Nadi that he was shortly to fly back to New Zealand on. He also happens to be a student pilot who is enjoying solo consolidation - so much so that he can't wait to get out of the circuit! :-). Anyway, here are the photos. 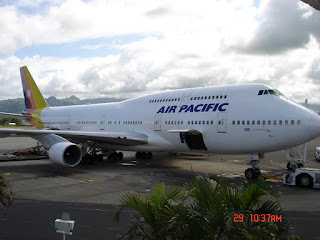 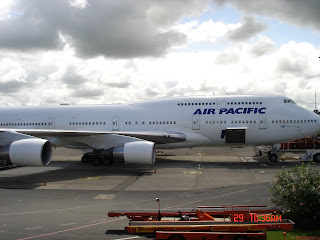 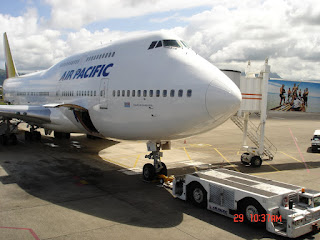 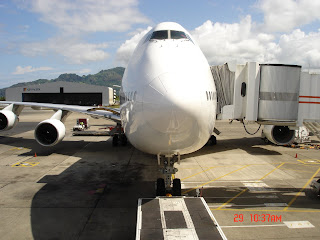