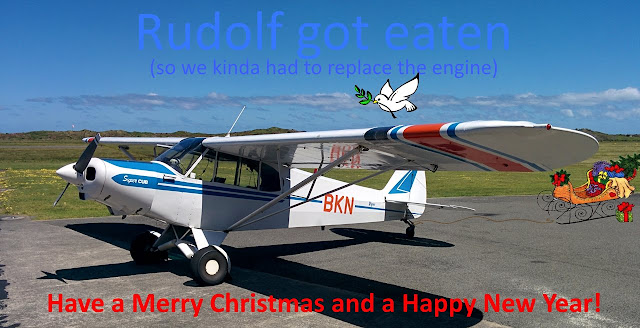 Things might be a little slow for a few days, but I'll be back to normal in the new year. I'm hoping for some exciting inflight videos in addition to the pictures!

Thanks for your continued support and encouragement!
Posted by Rodney at Friday, December 23, 2016 3 comments:

What a nice plane!

This is an accidental video which very nearly didn't happen!

I was flying the Aero Club's Cessna C172N, ZK-FLT. I didn't take my suction mount with me, and the aircraft had no solid place on the dashboard to mount the GoPro which would also hold the Blutack to hold the whole thing steady...

Anyway, after a trip to Paraparaumu and then to the Southern Wairarapa, I decided to see if I could just make it work. It sorta did work, although it's not great. Rather wobble and some weird artefact at around 21 seconds...

The video itself is of the return the Wellington. The flight starts be going past Mount Matthews on the Rimutaka Range, then on to the Eastbourne Arrival procedure to Wellington. Don't look too hard at the landing... it was a wee bit rubbish!

Flight to Paraparaumu and back

Today's flight was from Wellington [NZWN] to Paraparaumu [NZPP] and back, with 3 circuits at NZPP. The main reason was to get current in the Piper PA38-112 Tomahawk. It was also an excuse to try out my new GoPro Hero 5 Session camera.

The video isn't great - despite how it looks, the camera was attached firmly [using Blutack no less!] to the dashboard - next time I'll leave the camera's software image stabilisation off.

The weather was a little worse for my return, although perhaps not quite as bad as it looks here...

Another day of Super Cubbing

Just one boring photo :-) today after a couple of fun flights in Piper PA18A-150 Super Cub, ZK-BKN, up at Whanganui today.

It turns out that Whanganui can be a busy little place with the aero club busy all day, Air Chathams arriving, local helicopters buzzing around, a DH Venom departing and three visitors to Auckland Aero Club coming and going.

Fun times with goodness knows how many circuits flown. I think I'm getting the hang of it :-)