AC/DC fly out to Auckland

AC/DC's second Wellington concert was last night [Saturday]. This afternoon they jumped on their chartered Airbus A318-112 CJ Elite, 9H-AFL, to fly to Auckland. As you can see from these photos [and you could compare to photos taken over the last few days], the weather is back to "usual", wet and windy, although not too cold.

I understand that the departure was delayed for a short time when the aircraft was turned around into wind and a wing may have come in to contact with a ladder [or similar]. If true, not a good way for someone to impress their boss, although it can't have been too serious since the aircraft flew out.

Pictures are of the aircraft taxying, then on the departure. Although rather gloomy and wet, I guess at least it wasn't raining too hard. Lastly, note how the pictures accentuate how short this aircraft is compared to the A320's that normally fly in and out of Wellington. 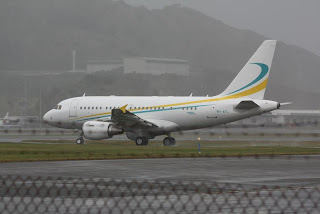 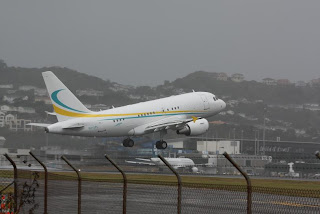 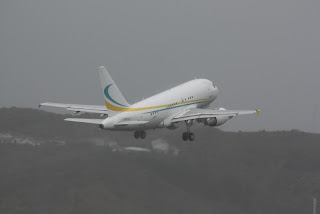 I went for a quick flight today to the southern Wairarapa area [Palliser Bay] in Cessna 172N, ZK-FLT; no photos - I was too busy flying and having fun :-)

I did get some photos of various other aircraft, including a UK-registered Dassault Falcon 2000EX, G-ITIG, registered to TAG Aviation. It's not often that we get visitors from the northern hemisphere here at Wellington. 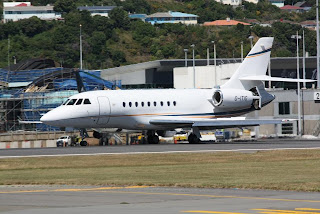 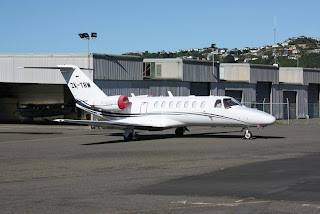 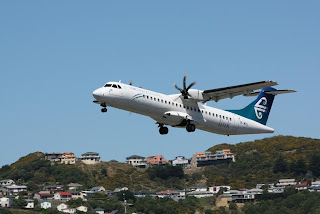 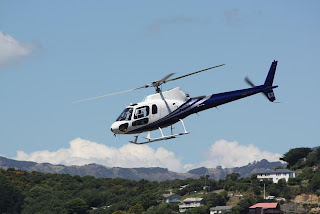 AC/DC flies in on an Airbus A318 Elite

Today's "unusual" visitor is an Airbus A318-112 CJ Elite. Although the rego is obscured, I believe that this is 9H-AFL, registered to Comlux Aviation Malta. The aircraft bought in the members of AC/DC [some small unknown music group or something ... :-)] and a few hangers on.

Although I don't claim to be a fan [and never will], the event is a big one for Wellington with two concerts planned. 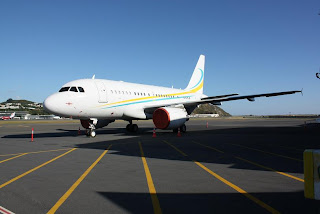 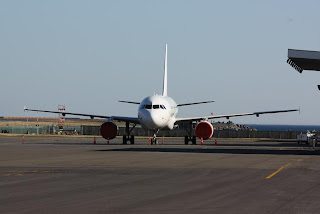 After all the bad weather of the past few weeks, it was a real relief to have a reason to leave Wellington for the day :-)

The reason was an introductory strip flying course with Willie and Craig of Avskills. What a day! After travelling to Picton aerodrome [ICAO: NZPN] in a Sounds Air Cessna 208B Caravan [a great way to cross Cook Strait!], Willie [A-Cat instructor, Flight Examiner] and Craig [C-Cat instructor and engineer] turned up with their Cessna 172S, ZK-SAN.

Without going in to all the details, we started with takeoffs and landings into Picton to get me used to having a stabilised approach with a constant nose attitude and using power to control the approach path. A bit different, but a lot of fun!

After this, a trip up the Wairau Valley, a quick reminder of forced landings, then landings/ takeoffs on a one-way farm strip! It's the first time I have been into such a strip, and this one was on the side of a hill, and was definitely one-way. Nice! Half an hour of takeoffs and landings and I was starting to get comfortable.

After this we flew a little further west to a private strip, this one with trees at the end. As you'll see from the photos, the trees are tall, and the only way out was through the trees..! Add in a little wind and I was soon heading towards the trees [thankfully Craig was a little more on to it!!], but 30 minutes or so of circuits was interesting.

Last bit of flying was back to Nelson [ICAO: NZNS] via the hills and some elementary mountain flying techniques. Nice! Very last flight was Nelson back to Wellington, again on Sounds Air C208B.

All in all, 2.2 hours of flight time. 2.2 hours might not sound like much, but it was full on the entire time with around 20 takeoffs and landings at 4 different airfields. An AWESOME day out and well worth it!

If you're interested in getting some advanced flight training, particularly strip training, Avskills are the right people to contact! Both Willie and Craig have a safety-focussed but relaxed approach, and I really enjoyed the training - I'll definately be using the techniques they introduced in my flying from now on. Awesome!

For members of Wellington Aero Club - more details in the next Windsock magazine.

Enjoy the photos! Top to bottom are:

- Me standing next to ZK-SAN at the top of the farm strip
- ZK-SAN on Willie's strip
- Looking down the strip...
- ...then up towards the trees... that gap looked even smaller as I was flying through it!
- Two Air Nelson DHC-8 aircraft at Nelson
- Beech B200, ZK-MAN, registered to Tasman Helicopters Above and Beyond, Nelson 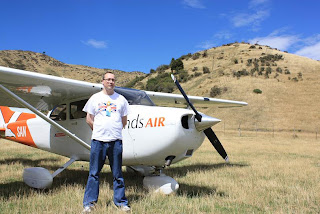 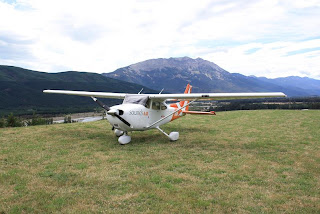 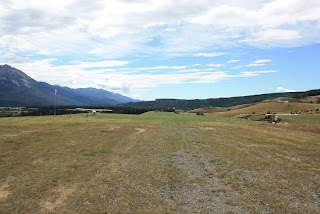 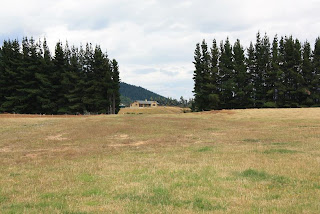 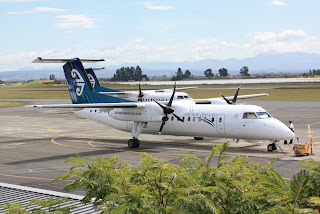 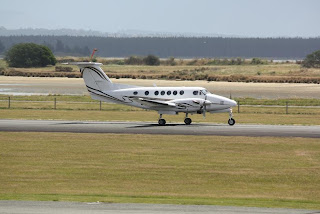 I'm still not sure about our weather!

I really am not sure about the Wellington weather. To give you an idea, yesterday started off in bright sunshine, but by mid-late afternoon, it had closed in and we had fog! Thankfully it did not last too long, but while it was here it caused chaos. Flights were cancelled and delayed - just as well it did not last a few more hours.

Unfortunately I was at work [I don't work in aviation] and so missed the worst of it, but Raynesh sent me a couple of photos to show what it was like. On a nice day the airport terminals would be in the background. Raynesh was only a few meters away from the light aircraft you can see.

BTW - the instructor in the background is a chappie called Karl. Good to see him working [evidence at last!]! Thanks to Raynesh for the photos. 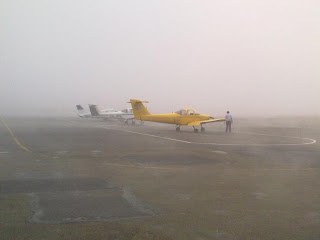 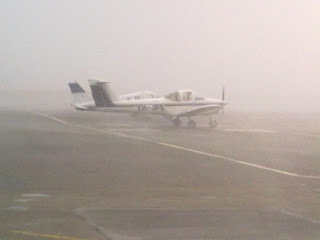 WINGS: A history of aviation from kites to the space age

A few weeks ago I finished reading a book called WINGS a History of Aviation from Kites to the Space Age by Tom D. Crouch.

It's an excellent book covering [as the name suggests] from kites to balloons the the Wright Brothers, right through the World Wars, the "Cold War" and the space age. It's an excellent read with almost every page containing some interesting fact or snippet. The style of the book is easy to read and will be very interesting to any aviation buff. The beginnings of aviation [that is, before the Wright Brothers came on the scene] are covered in much detail which is very interesting. The end of the book is perhaps more American-focussed but this is not a big issue - it is still a great read.

All in all, well recommended! 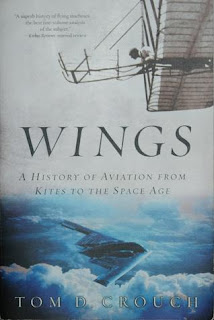 Welcome to a Wellington summer!

I know that this place is called "Windy Wellington", but for goodness sake! It's gusting up to 45 knots [over 80km/hr] on the ground, raining and I can't see any blue sky. The only difference between today and mid-winter is that it's about twice the temperature [around 11 degrees celsius!] of a mid-winter storm.

Oh well, here's something a little special. An old video of part of an interview with an old Boeing 707 test pilot, Tex Johnson, commenting on why he rolled a prototype Boeing 707 in front of prospective customers... I'd like to see someone get away with this these days! :-)

Email ThisBlogThis!Share to TwitterShare to FacebookShare to Pinterest
Labels: B707, Boeing, Video, Weather

I've joined the Facebook group "I'd rather be flying"... rather appropriate, I think :-)

I took Cessna 172 ZK-FLT up for a flight today. For those that know Wellington, a 34 Pencarrow departure, followed by a bit of playing around in the southern Wairarapa area. While there, we did a bit of flying around with the Nanchng CJ6, ZK-MAO. Thanks to "Bob the Photographer" [yet another skill of his!] we got some pictures as the Nanchang formatting loosely on us for a few minutes.

After this and a quick look at the local scenery, we returned to Wellington. Many thanks to Bob for taking the photos! 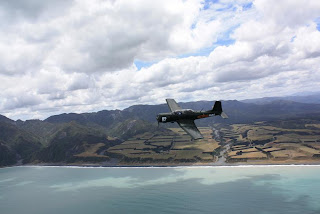 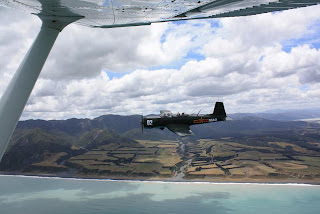 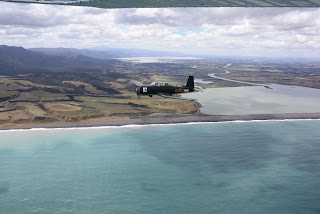 Here are a couple of pictures of a Piper PA28-RT201T Turbo Arrow IV which visited the Aero Club this afternoon. ZK-EZM is registered to a Nelson address and is easy to distinguish from other Arrows by the T-tail and the 3-bladed prop. 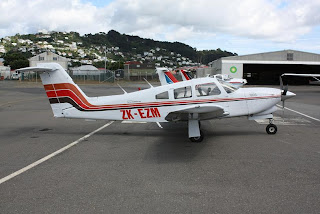 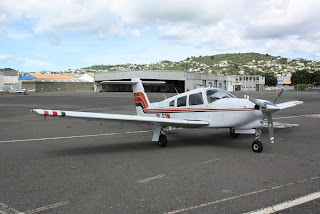 Harmon Rocket and the Terminal

From what I understand, the Harmon Rocket II [ZK-TWU] is essentially a modified RV4. This particular aircraft has a slightly modified Lycoming IO-540 in it. From memory, it went through around 90 litres of Avgas from Queenstown [NZQN] to Wellington [NZWN]. This would make it more fuel-efficient than a Cessna 172 over the same distance [and a lot quicker with a comfortable cruise approaching 200 knots!]. 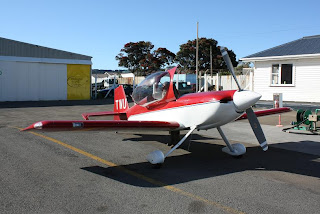 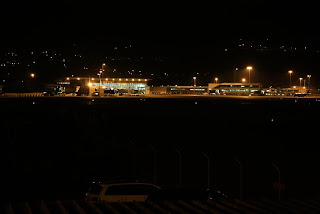 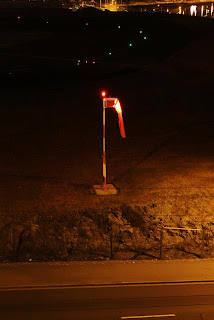