Merry Christmas to all of you!

Have a great break and see you back in the new year. 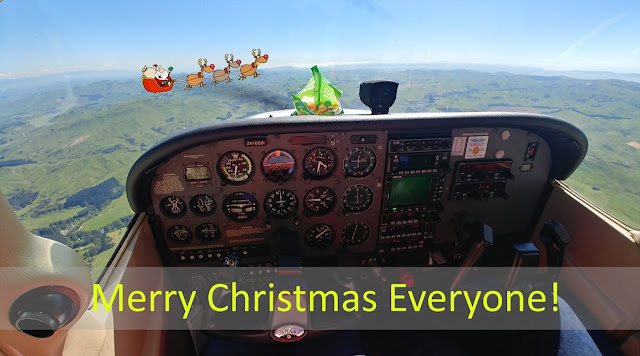 Here is a brief video of a flight last Sunday. The aircraft was a 2005 model Cessna 172S, ZK-CEO. A nice machine!

Turbo Stationair and a PC12

Here are a couple of visitors from Saturday afternoon...

First up is a Cessna TU206F Turbo Stationair, ZK-OAY. This is privately owned and operated.

Next up is a very flash Pilatus PC12/47E, ZK-TFL. This is operated by Distinction Hotels and is very very flash :-)

An insult to orangutans perhaps, but still...

This is a Boeing 757-236, VH-TCA, which is operated by Tasman Cargo Airlines of a NSW, Australia address.

If you look closely, it has the sub title of "The Flying Orangutan" near the rear, just below and forward of the picture of Jeremy Clarkson. A bit of an insult to one of them perhaps [and not the one pictured]...

This second-last post from my recent Auckland visit has four large aircraft - two Airbus' and two Boeings. First up the Airbus aircraft.

We start with am Emirates-operated Airbus A380-800. This picture shows quite nicely that there are  thrust reversers on the inboard engines only.

Next up is an Airbus A330-223, B-LNF, which is operated by Hongkong Airlines. This is the second time I have seen this aircraft - the first time was back in September 2011, at Chep Lap Kok [Hong Kong airport]. I really like the livery on these aircraft.

Now on to the Boeings. This first one is a Korean Air-operated Boeing 747-8I, HL7642. I think this is the first of these large Boeings I have photographed.

Last up is a Boeing 787-8 Dreamliner, operated by Thai Airways International.

In this next post from the recent Auckland visit are a business jet and an airliner.

The second, altogether rather larger, aircraft is a Cathay Pacific Airways-operated Boeing 777-369/ER. The registration is not entirely distinct, but I think it is B-KQO. This was carrying precious cargo in the form of family.

Posted by Rodney at Thursday, December 14, 2017 No comments:

Last Tuesday I spent the best part of the day at Auckland Airport [NZAA] while I waited for some people to arrive from overseas. While there of course I took a few photos.

This first one is rather interesting. It's a Samoa Airways branded Boeing 737-86N, but it has an Italian registration for an airline called Neos. What's happening? Well, as I understand it, Samoa Airways is a rebrand of the state owned Polynesian Airlines and this is the first [and I think only] Boeing 737 in their fleet. They have recently started flying from Faleolo International Airport [ICAO code NSFA], near Apia in Samoa to Auckland.

The aircraft is leased from Neos and I believe it is operated by the Italian crew, with Samoa Airways cabin crew... not 100% sure of all that, but I'm sure to be corrected if I am wrong!

Anyway, it's an Italian registered jet operating for a Samoan airline to New Zealand. Different!


BTW - it was a hot day, so there's a bit of heat shimmer in this photo and a number of the upcoming posts in this series.
Posted by Rodney at Wednesday, December 13, 2017 No comments:

Today's unique visitor to Wellington was this Dassault Falcon 2000EX, D-BIKA. I don't know the details of why it was here but it headed off to the north.

Posted by Rodney at Saturday, December 09, 2017 No comments:

Here's a picture of the Alliance Airlines-operated Fokker F27 Mk 50, VH-FKO, which is flying tourists around the country. It's parked outside the aero club and about to depart.

Tuesday 28 November saw a visit to Wellington of a JASDF [Japan Air Self Defense Force] operated Kawasaki C-2, registration 68-1203. This is a first of type visit to New Zealand and was here as the Japanese Government seeks to make some foreign sales of this type, as well as the Kawasaki P-1 Maritime Patrol aircraft.

Posted by Rodney at Saturday, December 02, 2017 No comments: