As of yesterday, there is another Cessna 172 hangered at the Wellington Aero Club. This aircraft is a 2004 model Cessna 172SP, ZK-CEO, and formerly based with Helipro at Paraparaumu aerodrome. This particular aircraft still looks good inside. The panel is of the round dial variety which is just fine by me :-). I have plenty of hours in various models of C172, including the C172SP from when I was at Auckland Aero Club. 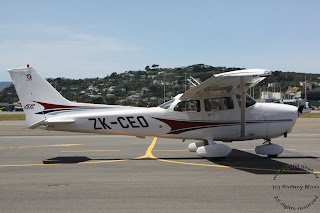 Today's "special" visitor is a Dassault Mystere Falcon 900, N900D. This aircraft has been parked up at Wellington for a few days. Unfortunately I don't have any more details, but if you want to see pictures of its arrival, click here for pictures on the MRC Aviation blog. 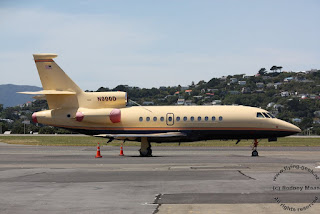 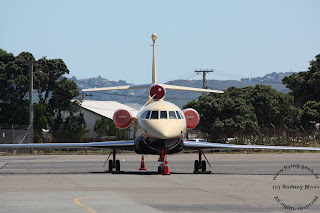 What follows is an awesome video of some strip flying in West Papu, Indonesia. The aircraft is a Pilatus PC-6 Porter, and the pilot is flying in an out of some very remote strips in amongst the mountains.

The video was originally posted on the pilot's blog at http://indopilot.blogspot.co.nz/2013/01/gopro-hd-movie-timika-bush-flying.html. His blog is well worth a look!

Pictures from today are of both of Mount Cook Airline/ Air NZ's new ATR-GIE ATR72-600 aircraft, ZK-MVA and ZK-MVB. The other photo is of a Cessna 172S, ZK-CTP, registered to CTC Aviation Training. 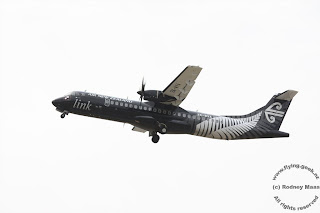 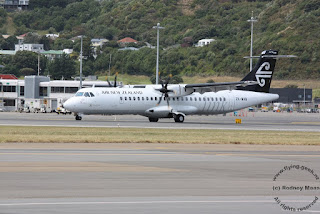 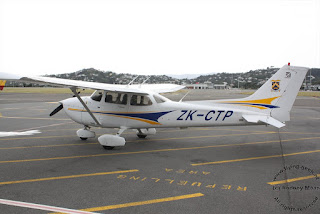 The most exciting thing that happened today was a flypast of the world's only airworthy DH98 Mosquito F.B Mk.26, ZK-MOS!!!

As much as anything, this was to advertise the Wings Over Wairarapa airshow that is on this weekend, but it was great to see it for one last time in formation with a Curtis P-40E, ZK-RMH [I think this is correct] and Supermarine Spitfire Mk IX, ZK-WDQ!

Unfortunately I won't be at the airshow this year, although I'm very much looking forward to seeing some pictures and hearing the stories for those I know who are going.

I mentioned earlier that this will be my last time to see the Mosquito. Unfortunately, after this airshow it flies back up to Auckland, and will be crated and sent to its new home in the USA.

Here are a couple of pictures from the flypast today. Click on them for larger images!

Saab 340B at Wellington

This is a bit of an unusual visitor as it usually resides/ works in Australia, so it is good to see it over here.

Also, it appears that CAA are registering parachutes, paragliders and hang gliders nowadays [for example: http://www.caa.govt.nz/Script/AirReg3_new.asp?Mark=10B]. These are in a different series of registration marks to other aircraft. I'm assuming this is as a result of CAR Part 115 [Adventure Aviation] coming into force. This is probably not news to many of you, but it was to me when the CAA website gave me to entire aircraft register, when trying to find info out about a single aircraft [that is weird!], so there you go. 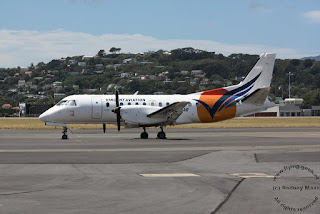 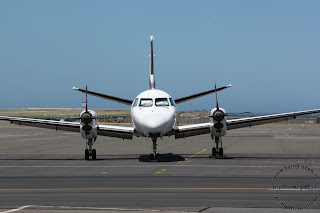 Further to my last post, here is quick video of one pass of the de Havilland DH112 Venom, ZK-VNM at Wanganui. It was only recorded on a handheld recorder, so go to the 1 minute 10 second mark to see the approach and overshoot.

Up to Vegas - Wanga-Vegas that is

Today started off really nice - well, hot with low winds and so early afternoon Kai and I took the Club's Cessna 172N, ZK-FLT for a trip to up Wanganui. After leaving Wellington, we stopped off at Paraparaumu to drop off a Club instructor before continuing to Wanganui.

To say the visibility was great, would understate things somewhat! Around Foxton, we could clearly see Mt Ruapehu and Mt Taranaki - unusual to say the least.

Anyway, Kai landed us at Wanganui where we hopped out for 30 minutes or so to stretch the legs. After pre-flighting the aircraft for the return flight, we got the extra thrill of a de Havilland DH112 Venom Mk1, which I believe was ZK-VNM based at Ohakea Airbase, performing a flypast. Nice! After watching a couple of passes down the runway [I'll see if I can get some video at some stage], plus approach and overshoots, we jumped in the Cessna to head back.

This was my turn to fly and it was all fine, until getting back into the Wellington Control Zone where a bit of low cloud and the increasing and gusty winds made for a bit of fun. As I sit at home writing this, I'm glad we made it back when we did, as it's now back to being somewhat foggy...

Anyway, I only have two photos - the first is the panel from the C172's panel as Kai flew us north [note: wings level, neither climbing or descending, even the ball is in the middle - all at the same time! :-)], and the second is a Jabiru J230 UL, ZK-STA and registered to a New Plymouth address. 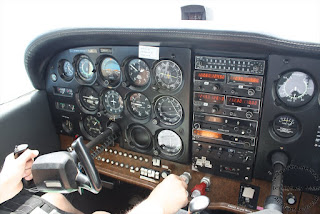 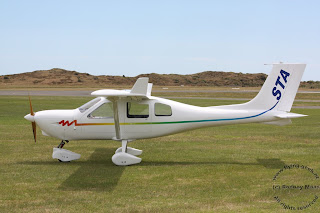 Video of some microlight flying in Australia

Here's a video I came across, of some microlight flying in [I think] Western Australia. The aircraft is a Skyranger Swift, registration 19-7407, which the owner built himself.

Over the Wairarapa and a gyroplane

What a fantastic day today has been. The weather has been absolutely perfect with little wind and lots of sunshine. Too good to stay on the ground.

This morning I was invited to go along for a ride in the Club's Piper PA28-161, ZK-MBG, an offer which I happily took up. Kai and I headed off up the Hutt Valley to Masterton, stopping just long enough to pay the landing fee and then heading back to Wellington flying overhead Martinborough and the southern Wairarapa's Lake Onoke. A great trip to be sure. Of course, I was having so much fun that I didn't bother to take any photos...

On arrival back in Wellington, we parked up and then saw a Magni Gyro M-24 gyroplane, ZK-MWR, turn up. It would be extremely rare to see one of these aircraft at Wellington, and it was very interesting to see [photo below]. It turns out I last saw this aircraft in Wellington in June 2010.

Anyway, that's it for today, although it looks like another trip tomorrow with Kai, probably including Paraparaumu, Foxpine, Wanganui and Hawera or Stratford. All going well, there will be more details tomorrow evening! 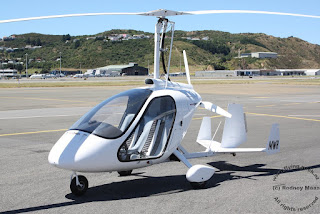 It has been a "proper" Wellington day today, with winds gusting up around the 50 knot mark this morning. Obviously no Club flying was happening.

I headed up to a viewing spot at Strathmore, which provides great views of the approach in these northerly winds... it must have been much windier up there as I had trouble standing from time to time. Needless to say, it was very hard to get good photos, and I didn't hang around long.

However, here are two reasonable photos. The first is of the airport itself, and the second is of an Air NZ Boeing 737-3U3, ZK-NGD, on final approach. It looked like a fairly smooth approach - at least compared to some DHC-8's I saw earlier in the day! 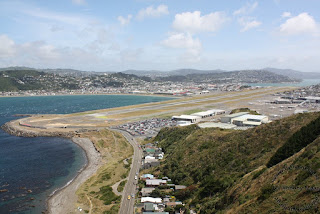 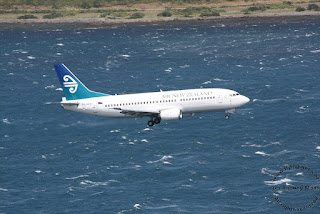 Posted by Rodney at Wednesday, January 02, 2013 No comments:

In this first post for 2013, I've included the last photos taken from 2012. These were all taken at the Wellington Aero Club [a great place to take that first step or to continue your flying!] yesterday afternoon.

The first is the Nanchang CJ6, ZK-MAO, looking great in its new coat of paint [it probably helps that it was cleaned earlier that day as well!]. The second is Piper PA28-161 Warrior, ZK-MBG, which I last flew a few days again. Finally we have Beech C90A, ZK-SKL, registered to Skyline Aviation. 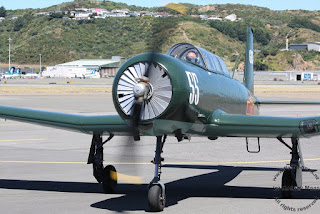 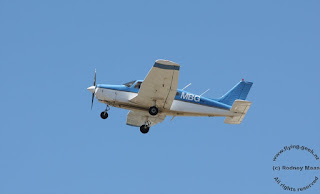 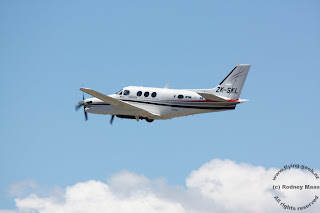