Wellington to London: Others at Abu Dhabi

In this final "Wellington to London" post, I have a selection of other aircraft I saw at Abu Dhabi.

One thing you may notice in all of these photos are signs of construction. I'll see if I can find a photo that shows this better, but the airport is essentially being reconstructed to increase capacity. It is almost as if everywhere that is not currently in use is a construction site. It'd be interesting to transit through here in a couple of years!

Anyway, top to bottom are:

Following on from my last post, I spent about 8 hours at Abu Dhabi International Airport [OMAA]. It's a nice enough airport - thankfully well air conditioned [it was comfortable inside but about 41` deg celsius outside....!] - and easy to get around.

Transit security was interesting. On first look, it appeared to be organised mayhem [minus the "organised" bit] but in fact it went quite quickly and very smoothly. They were concerned that all metal came off, but LAGs [Liquids Aerosols and Gels] did not need to be separated. There was lots of noise, but none of it directed at the passengers from what I could see.

Terminal 3 [where we arrived and departed from] is fairly spread out. I was a little surprised that eating options were a little limited, but there was a bar, a Burger King and a reasonable selection of other outlets - just not as much as I would have expected in a terminal of this size and stature.

Anyway, on to the photos of aircraft. In this post I have a few sample photos of Virgin Australia, Etihad and Jet Airways aircraft. Top to bottom are: 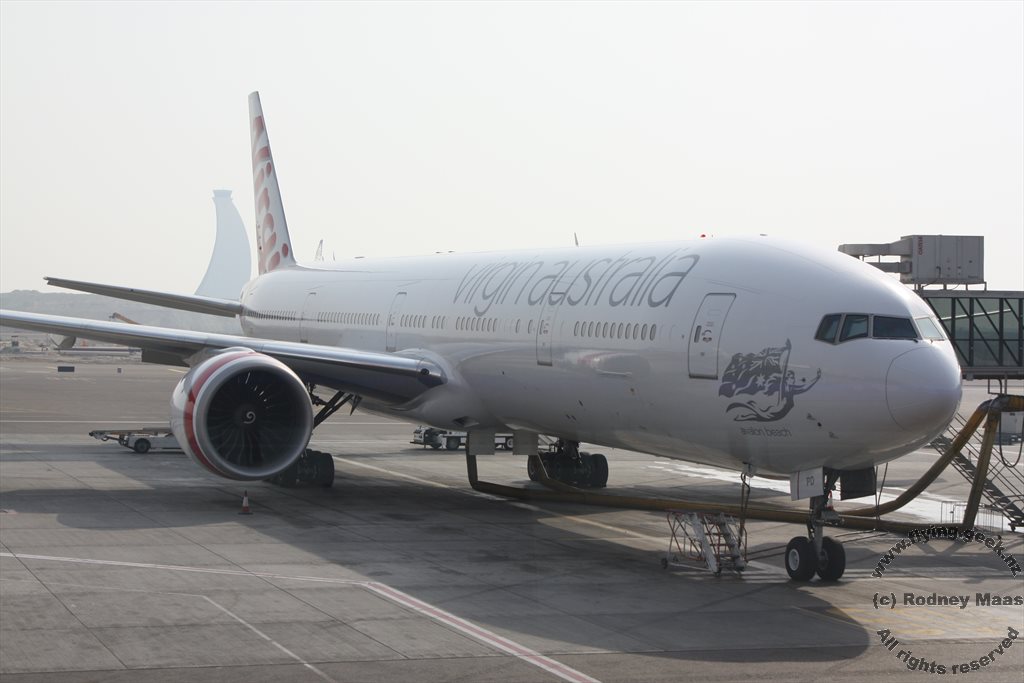 Wellington to London: The intro

As the post title indicates, I'm now on my long-awaited holiday, and in the UK [at least for now]!

My ticket is a Virgin Australia ticket, although the flights so far have been on Air NZ and Etihad. The route flown was Wellington [NZWN] to Sydney [YSSY] to Abu Dhabi [OMAA] to London Heathrow [EGLL]. All in economy with 5 hrs in Sydney and 7 in Abu Dhabi. 37 hours of travel, but I coped with it just fine.

Obviously I made it, although for the first time ever, not everything went particularly smoothly.

Firstly, I was [yet again] disappointed by Virgin Australia's [VA] practices - this time around communication. Basically, they had booked me on Air NZ for the NZWN - YSSY flight [fine], but had not told me they it was without a meal. No big problem, but why would you hide this from your customers? Secondly, I was unable to choose seats for the long haul sectors [YSSY - OMAA and OMAA to EGLL]. VA's social media did respond quickly, and suggested I would have to sort it out in Sydney... but... believe it or not, there was NO ONE airside at Sydney to assist customers!! Yes, Idid ask. I ended up sorting the seat after I reached Abu Dhabi with an Etihad rep...

Lastly, my bags did not arrive. Looking at the bag tag, it appears that Air NZ gave me my boarding passes through to London, but my bag only as far at Abu Dhabi. I can't be 100% sure, but there's no mention of London Heathrow on the original bag tag. Crap. Etihad did get it sorted the next day so I now have my bag.

Apart from that, the flights themselves. The Air NZ flight was short and fine. Not flash, but fine. It was an Airbus A320-232, ZK-OJC, as pictured below.

The Eithad flights were actually pretty good. The service was good, the crews friendly and helpful. The food was nice and the lavs were kept clean. On the 14/ 15 hour sector from YSSY to OMAA I was asked by someone if I would swap with her husband. I already had a good seat for that sector, but her husband was in an exit row. Score for me! Aircraft on this sector was a Boeing B777-300.

When I got my seat changed for the final sector in Abu Dhabi, I was given an exit row also [I only asked for an aisle seat], so I feel like a bit of a winner in that regard :-) Aircraft on this final sector was an Airbus A340-642, A6-EHJ. This aircraft is in the 'Abu Dhabi Grand Prix 2014' livery, also pictured below. Nice.

Last up is a picture of the new Abu Dhabi ATC Tower. This is not only massive, but very flash!

The next posts will have a few photos from Abu Dhabi airport. For now, take a look at all those cranes. Yes, they are all on the airport and show only a tiny part of the redevelopment. 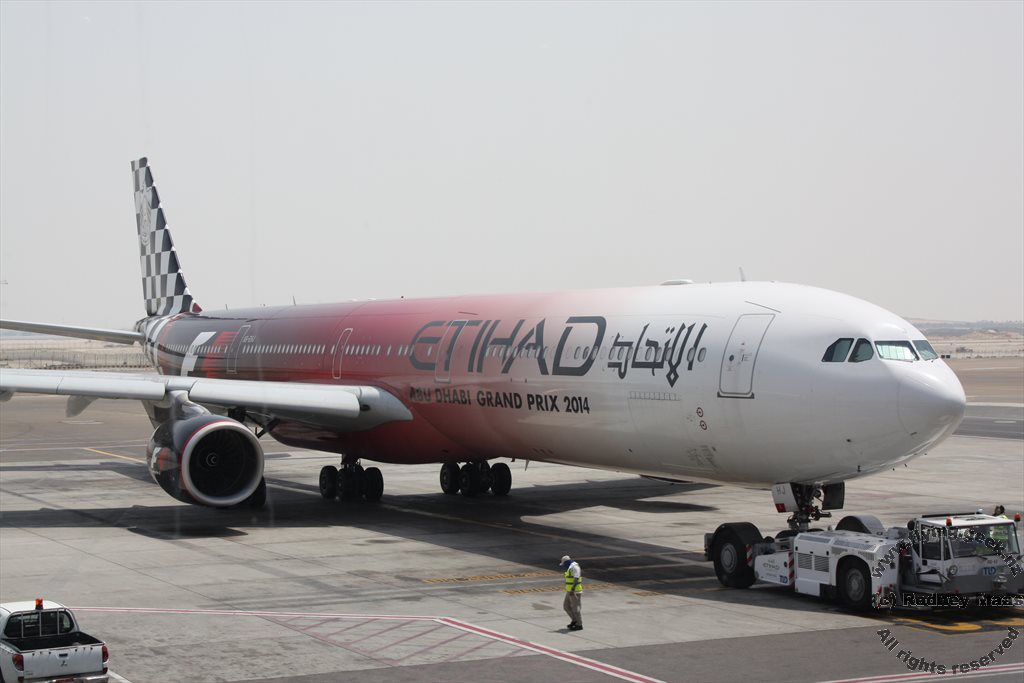 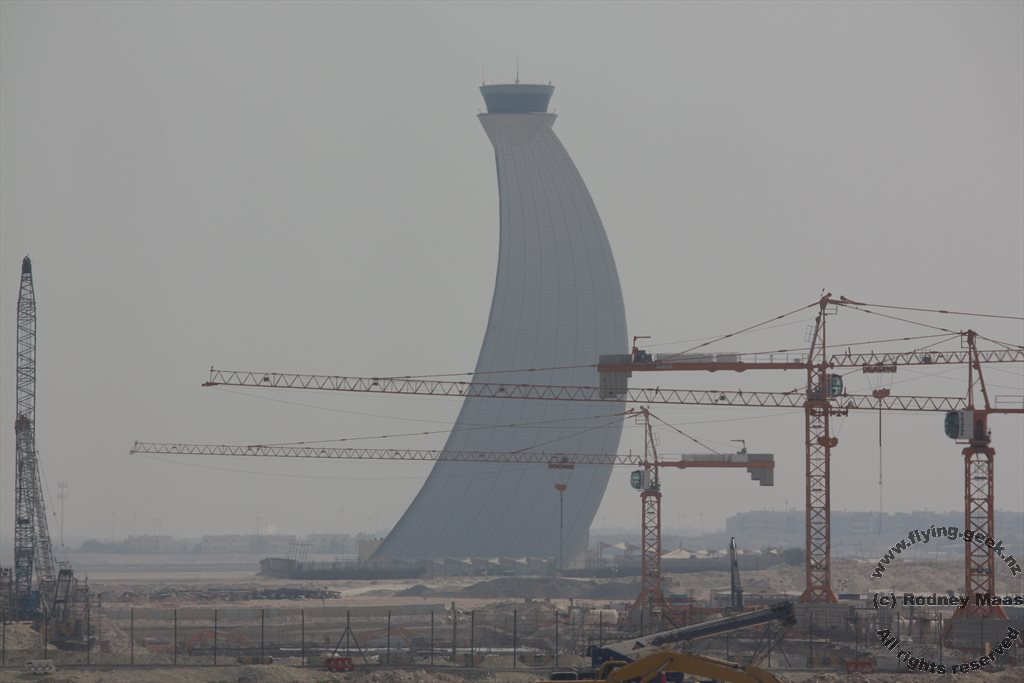 Finally, after several months laid up, the Wellington Aero Club's Piper PA28-161, ZK-MBG is back online and sporting a new paint job.

I understand that it may receive more detail at some stage, but for now it is great to have it back!

The other aircraft spotted today is a Eurocopter EC130 B4, ZK-IUP, registered to Over The Top Ltd, of a Wakatipu, Queenstown address. 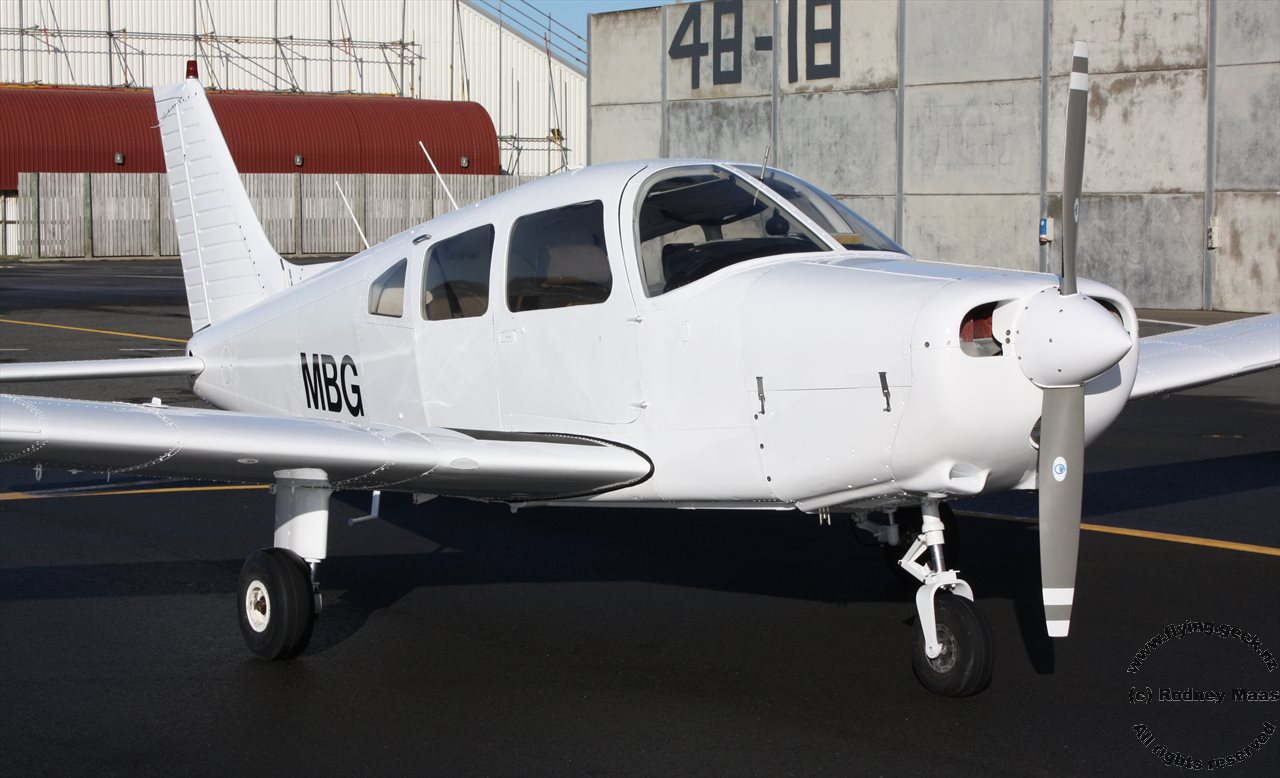 Lastly, I'm heading off on holiday. I'm not sure how regular any updates might be, but I'll try to get at least one or two in over the next few weeks. If it goes quiet though, it just means I'm enjoying myself in some sunshine!

After a long time out of the air being painted, the Aero Club's Piper PA28-161, ZK-MBG, is almost ready to go. In the following picture you can see the shiny new paint job, that the registration has been applied. It appears there are just some finishing touches to be applied around the windows.

After this I understand it just needs to be test flown and a quick ferry flight for the re-weigh and a compass swing [at Paraparaumu aerodrome], then it's all go again!

It will certainly be good to have it back in the air. 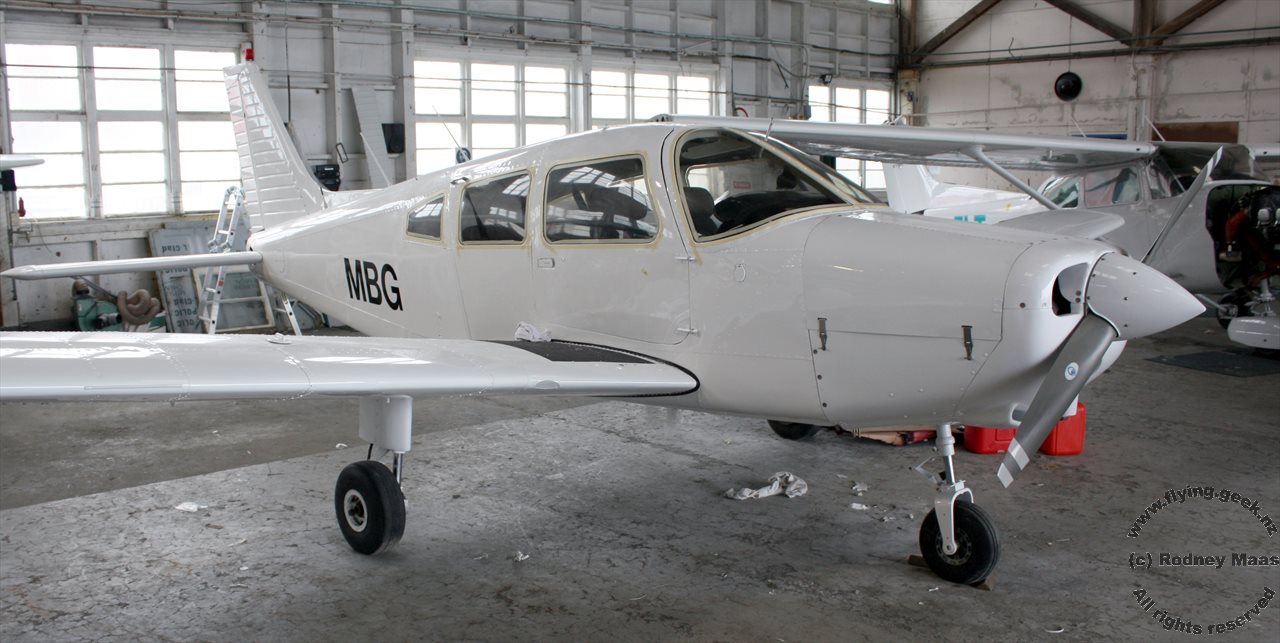 I guess you've all heard of the downing of Malaysian Airlines flight MH17 over the Ukraine earlier today. A very sad situation for all involved. I'm guessing that there will finally be some more scrutiny of the Ukraine/ Russian-backed civil war [am I allowed to call it that???!] and hopefully an end to that conflict sooner rather than later [well, we can live in hope].

Here's the only picture I seem to have of the aircraft involved... a Boeing 777-2H6/ER, 9M-MRD, shown below landing at Auckland on a fairly dreary day about one year ago, late June 2013. 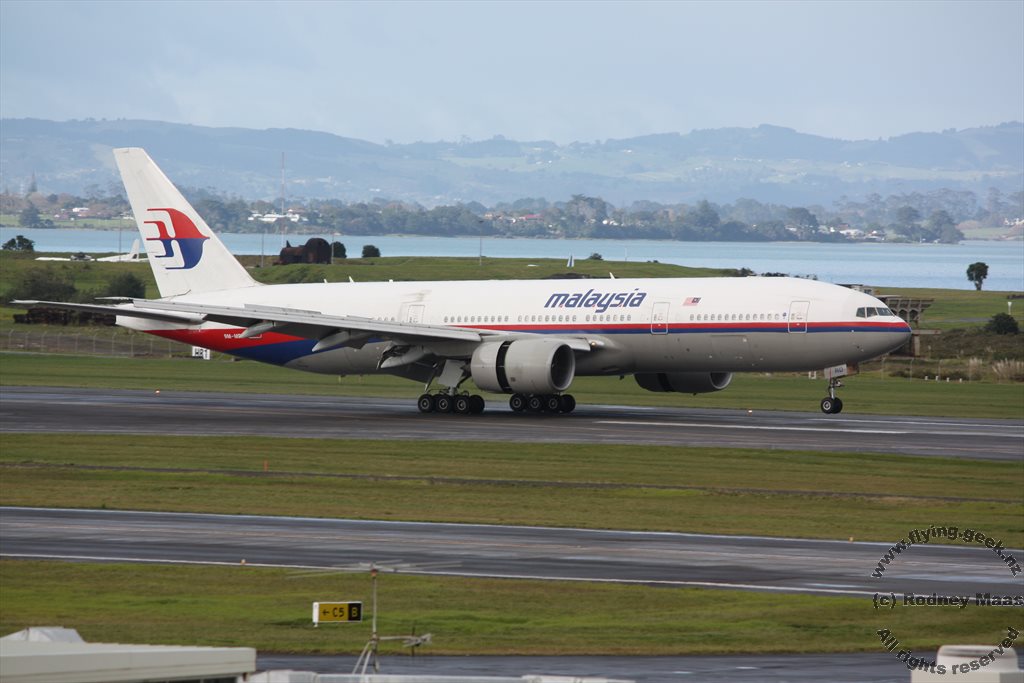 This is something a little different for today... I was looking over New Zealand and noticed about 17 high altitude balloons from Google's Project Loon.

What makes these flights a little different is that the predominate winds over new Zealand tend to be westerly at the higher altitudes that these things are floating along at. These flights however show very clear southerly winds and, particularly as they get up above Auckland, an easterly component.

If this keeps up [which I doubt], they'll be over Australia in a few days [rather unlikely, I suspect]. Below is a partial screen cap from Flightradar24.com [links to Flightradar24 on another blog page]. Enjoy! 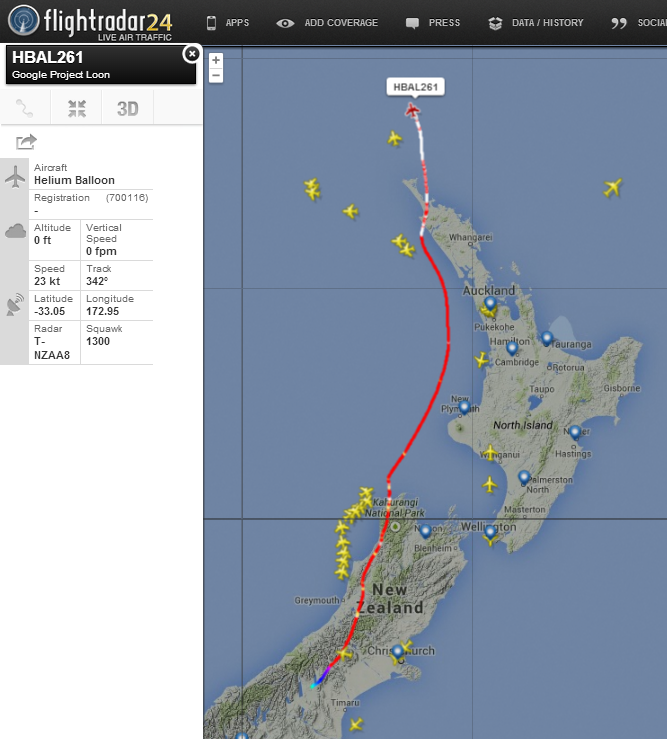 One Boeing, one Airbus

There was nothing much happening at Wellington airport today, especially compared to the excitement at Auckland yesterday [with the arrival of Air New Zealand's Boeing 787-9 Dreamliner, ZK-NZE].