Here's a picture of a Schweizer 269C at Wellington International Airport earlier today. ZK-HVX is registered to Heliflight Ltd and is based at Ardmore airfield. I understand that the pilots are intending to go at least as far as Taupo today. 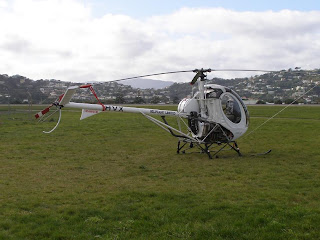 Here are some more pictures of a couple of Cessna 510 Citation Mustangs at Wellington today. The aircraft on the left of the first picture is the US registered N968CM. I presume the other one is ZK-MUS. 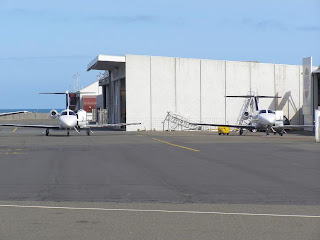 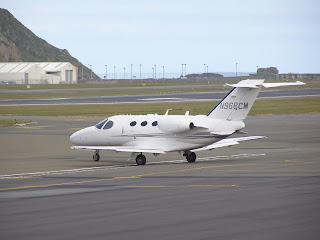 Qantas seems to have had a rough ride recently, making the news rather too often for all the wrong reasons. Holes in planes and engine problems [etc] are never welcome! Anyway, here are some pictures of a Qantas B737 taking off from Wellington today. Thankfully no explosions or other issues :-) 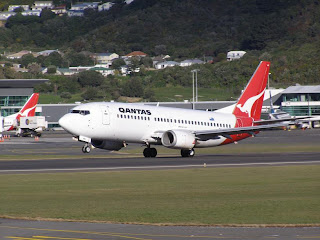 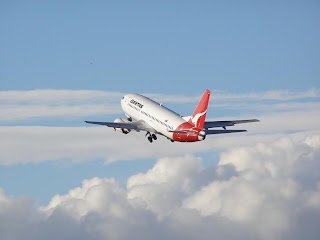 Email ThisBlogThis!Share to TwitterShare to FacebookShare to Pinterest
Labels: B737, NZWN, Qantas

I was at the aero club today [surprise, surprise!], just hanging around and watching the commercial flights come and go. There was not much "light" stuff today with winds up to 40 knots and a fair amount of crosswind.

I was happy to spot a Royal Australian Air Force C130 Hercules down on the Air Movements Base apron. What I did not expect was that there would soon be a second C130 on the apron. Being a Hercules, I first noticed the exhaust smoke then the aircraft :-)

I managed to get a number [perhaps an understatement] of pictures of the second aircraft, and later noticed it had an inscription on the front-left side of the fuselage. It appears to say 20000 Hours Flying then something else that I cannot read on my pictures. Any ideas??

Anyway, here are the pictures.

[Post edited - many thanks to Mike Condon of MRC Aviation for the correction :-)] 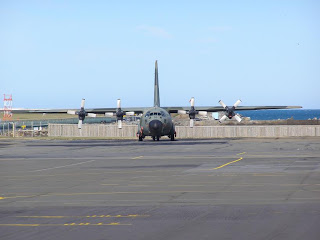 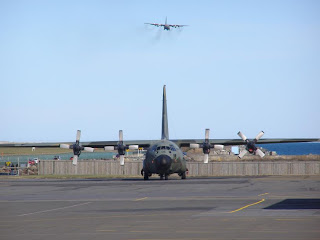 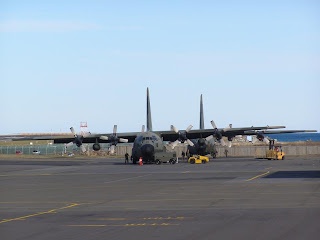 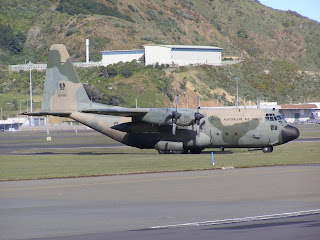 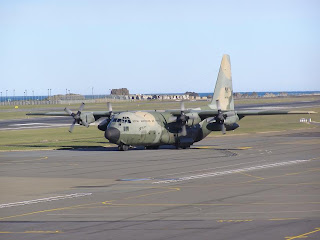 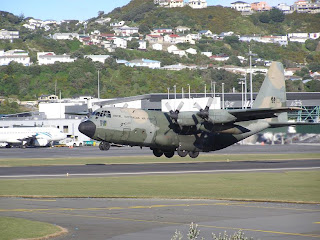 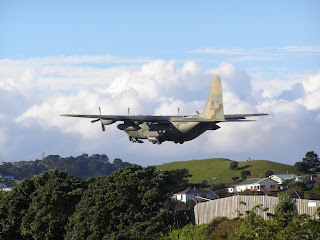 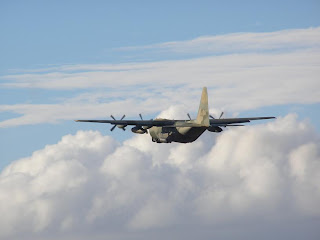 No Brass, no Monkey, this weekend

I was due to go on the Brass Monkey trip this weekend, but, due bad weather, it has been postponed again; this time until early September... we'll see :-)

I was supposed to go for a flight yesterday, but with the weather being rubbish and the aircraft in maintenance, that was a no-go.

Today my preferred aircraft was still in maintenance, but there was another Piper PA28-181 Archer available, so I took that up for a few circuits. ZK-FHQ is a recently repainted aircraft that I briefly profiled here. The aircraft is good to fly [I think I had 1000 feet/min climb at about 85 knots, 2 POB], and I managed 4 circuits in 0.6 hrs - rather good for Wellington's fairly busy class-C airspace. No pictures, but we had very light winds [2 knots reported for the surface wind], almost a clear sky, 50Km visibility and snow on the hills after the cold weather of the past few days.

Spit roast, quiz and a visitor

Saturday evening was the Wellington Aero Club's annual quiz evening, combined with a delicious Spit Roast Co meal, which was awesome as always. The quiz was held in the Club's bar/viewing lounge and great fun, although [with very few exceptions] a quiz team with me in it might not do too well... Congratulations to the NorfolkNChance team [pictures follow].

Sunday afternoon we had a visiting aircraft from Ardmore Flying School. ZK-VAT is a Cessna 172R. 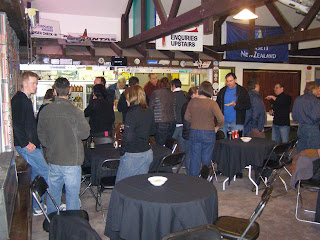 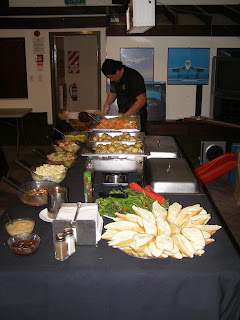 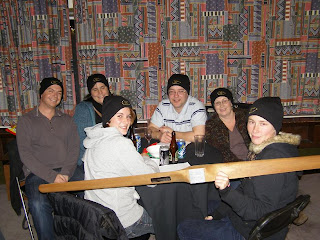 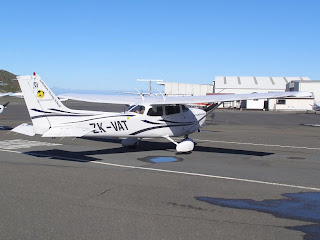 Here's a picture of a Cessna 172N. ZK-KVB is registered to a Christchurch address [I believe that it may be based at Wigram]. Apparently they have been stuck at Wellington due weather for a few days.

They managed to get off today heading north to Palmerston North. 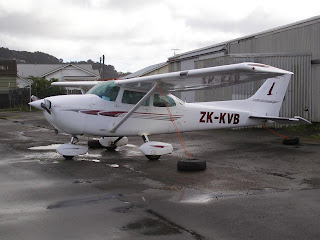 Question: The Bell X-5 was based on what World War 2 prototype aircraft? What was the major advance on the prototype incorporated into the X-5?
Posted by Rodney at Thursday, August 07, 2008 2 comments:

Email ThisBlogThis!Share to TwitterShare to FacebookShare to Pinterest
Labels: Quiz

Well done to Nick who provided the wanted details, summarised as follows:

The aircraft was the Dornier Do-X. It had 12 engines. On one flight, the plane took off carrying 169 people consisting of 150 passengers, 10 crew and 9 stowaways.

Anything interesting fact is that despite all those engines, they regularly overheated, and the aircraft often had difficulty getting much above 250 feet AGL... ouch!
Posted by Rodney at Monday, August 04, 2008 2 comments:

An easy one for the start of August!

Question: Which flying boat took to the air in 1929? What was special about the performance of this aircraft?

Later that year it it carried a large number of people. How many people were on board?
Posted by Rodney at Sunday, August 03, 2008 5 comments:

Email ThisBlogThis!Share to TwitterShare to FacebookShare to Pinterest
Labels: Quiz

The following are pictures of a Beech B200C, registered to Skyline Aviation of a Hastings address. ZK-PLK is equipped as an air ambulance, and on arrival it appears that two people were taken out of the back, and maybe a single patient was put on a few hours later as it left.

The aircraft itself is a beautiful example. It was first on to the New Zealand register in April 2008 [having previously been on the US register]. The rear left of the fuselage has an embedded airstair door within the cargo sized door, making it easy to load and unload people on stretchers.

In the second photo, the red/silver coloured device is used to lift people in and out of the aircraft. Here are some pictures of aircraft that are back online at the Club. The first [ZK-FHQ] is a PA28-181 Archer that I featured a while ago. I thought that I would just get some better pictures of it. I'm still very impressed with the paint job.

The second is of ZK-EIF, a PA28-201R Arrow III, that has recently been completely stripped, painted and the inside [excluding the panel] refurbished, plus a new engine, constant speed propeller, vortex generators on the wing and under the elevator. It's pretty much a new aircraft. The outside is very still shiny and new. Awesome! A short delay to the Brass Monkey

I was scheduled to fly to Nelson Lakes tomorrow [Saturday] with a bunch of others for the annual Brass Monkey event, hosted by Nelson Aero Club [Click for website]. Unfortunately, due weather, it has been postponed until 15-17 August [I'm planning on being there for the Saturday and Sunday only].

Hopefully a few more of you are planning on coming. I've never been to one of these events, but I'm definitely looking forward to it!
Posted by Rodney at Friday, August 01, 2008 1 comment: