Quiet at Wellington for a good reason

The good reason is that almost every one of the Club's aircraft headed off to Masterton for a day out and a bit of practice. Therefore, there was nothing much GA-wise to see.

I did get two photos though. The first is a Kawasaki BK117 B-2, ZK-IBK, rescue helicopter which is operated by Skyline Aviation of Hawkes Bay.

The second is a British Aerospace Jetstream J32, ZK-VAI, and is registered to Vincent Aviation (in receivership).

Diamond Twinstars and an A319

I was at the aero club for a meeting this evening, and got to photograph a couple of interesting aircraft.

The first two are Diamond DA42 Twinstars from CTC Aviation Training, based in Wellington. I believe that both ZK-CTJ and ZK-CTM are here for the night.

Last up is a terrible picture of what I believe to be an Airbus A319-133/CJ, B-6435, operated by a company called Evergrande. Unfortunately this was the best I could get. It appears to have left this evening [after I left the airport], but well after dark.

If anyone has a daylight picture of the arrival from this afternoon that I could share, feel free to send it my way :-)

... there is not much to do except to share a couple of pictures and an old war movie.

The pictures are of two types which are rapidly disappearing from NZ skies - the Boeing 737-300 and the Raytheon B1900 - which Air NZ are in the process of withdrawing from their fleets.

Raytheon B1900, ZK-EAR, operated by Eagle Airways/ Air NZ, but also not for much longer

The video is an old one called "The Final Countdown", Be warned that the plot is rubbish, the acting worse and the script... well... never mind. It does however have lots of footage of Tomcats, Corsairs, Zeros [actually I think they might be North American Harvards painted up to look like Zeros...], some helos, an aircraft carrier and what might be some historic footage. Great if you have about 1.5 hours of your life to waste! Enjoy [if that is possible!! :-)]!

Today's exciting news was the arrival of an Adu Dhabi Amiri Flight Boeing 787-8 Dreamliner, A6-PFC, into Wellington less than an hour ago.

I understand that the aircraft is here in support of the UAE team in a Cricket World Cup game tomorrow. The aircraft arrived direct from Nadi, Fiji.

Unfortunately it arrived right on dark, so the photos are not very good at all. These are the best two that I had [and yes, I had to brighten them somewhat]. Unfortunately I probably won't get to see it's departure.... I had to scrape myself off my deathbed :-( to get these... damn man flu!

Today's cool photo is of a Royal Australian Air Force [RAAF] Boeing C17A Globemaster III, A41-207, parked up at Wellington! What a cool machine!

This aircraft arrived at Wellington earlier today., but left around 5pm-ish for a quick trip to Blenheim/ Woodbourne and back. Sources indicate that among the passengers was the Hon Gerry Brownlee, who appears to have found yet another way to avoid the airport queues :-)... but serious, as Minister of Defence, I suspect that this might be a precursor to the rumoured announcement of the RNZAF purchasing 2-3 of these aircraft in the next 12 months, Yes, I'm calling it - with a 75% probability - so not certain, but close enough. We will see.

Anyway, here is the picture!

Just a couple of civil aircraft to show today. First up is an Evektor - Aertechnik Sportstar Plus, ZK-NPT. This aircraft is a Light Sport Aircraft [LSA] and is registered to Pacific Pilot Training of a Nelson address. As cane be seen, it is tied up nicely, which is just as well as the weather was turning rather awful soon afterwards. Speaking of the weather, it was bad enough that a couple of our pilots diverted elsewhere this afternoon... :-)

Just a couple of items of note today, with the RNZAF's NHI NH90, NZ3301, still at Wellington this morning. It appears that they went to leave, only for the helicopter to go u/s [unserviceable]. This resulted in the helicopter staying until later in the afternoon.

With the NH90 still here, it meant a different parking location for the Boeing 757-2K2, NZ7572, much closer to the aero club. The B757 was only here for 30 minutes or so before leaving for Christchurch then back again later in the afternoon for another 30 minute stay.

Anyway, here are a few photos:

NZ3301 taxiing out for departure 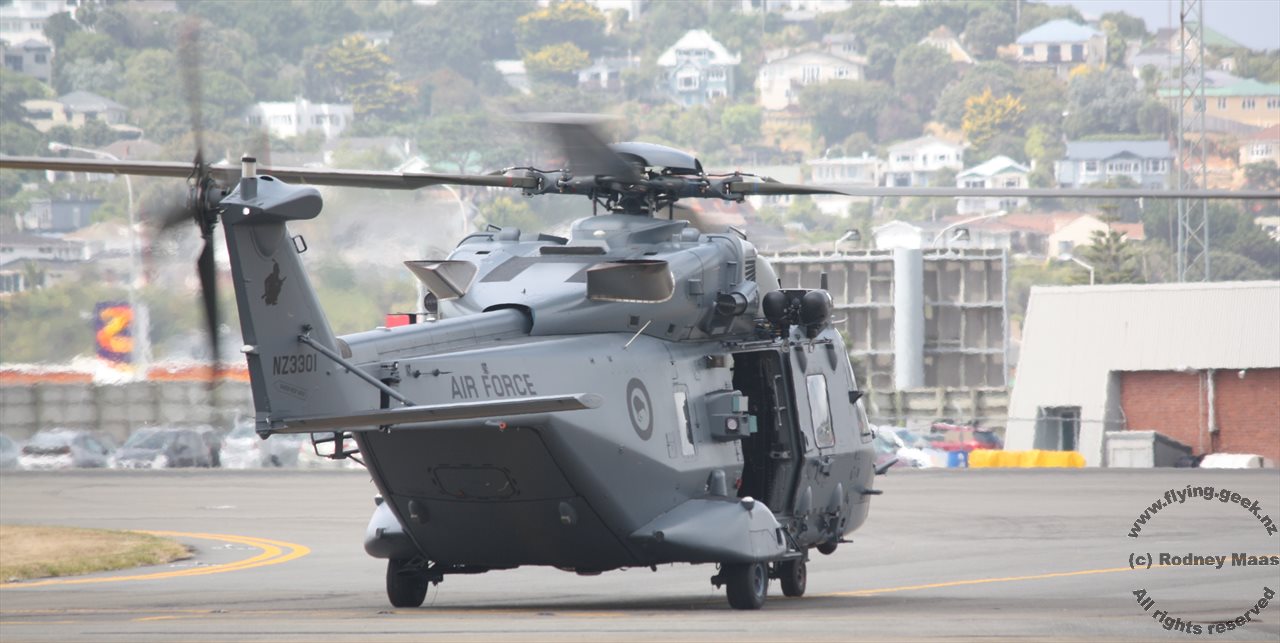 NZ3301 taxiing out for departure

NZ3301 lifting off - note the helicopter crewman standing at the door with a leg out!

I arrived back in Wellington today after my brief holiday in Whanganui. I only had an hour or so at the aero club, but I did sight a couple of interesting helicopters.

The first one is a Nelson-Malrborough rescue helicopter, a Kawasaki BK117 B2, ZK-IMN, registered to Garden City Helicopters of a Christchurch address.

The other helicopter is a NATO Helicopter Industries NH90, NZ3301, operated by the RNZAF. This arrived and shut down at the RNZAF Air Movements Base just down the apron from the Aero Club.

I am on holiday at the moment in Whanganui. The main reason is for a family visit, but while here, I have been quite keen to learn to fly Wanganui Aero Club's [or click here] Tomark SD-4 Viper, ZK-EAW. The Viper is a Light Sport Aircraft [LSA] and as such it's a wee bit lighter than other aircraft I have flown with a MAUW of only 600Kgs.

The aircraft is powered by a 100Hp Rotax 912 and gets along quite nicely at about 100 knots and a miserly 18.5 litres of mogas 91 per hour! The twin Dynon displays are pretty cool - easy to use although taking a bit to get used to for a crusty old PPL like me :-) - with combinations of PFD, Engines instruments and a nav/ map display available, and pretty much everything but the radio handled through it! It is also significantly less expensive to run [less fuel, cheaper fuel, likely less maintenance] that a 40 year old PA38 [and flies at least as well as a Tomahawk!]. Stall warning is the buffet - no sirens or warning lights here, but basic and power on stalls appeared easy enough to handle. It glides well at a comfortable 65 knots.

The aircraft is easy enough to fly, with just a few obvious differences from the heavier GA aircraft I am used to:

Apart from all that, it's fun to fly!

If you haven't done a rating in something this light, or if you're interested in what an LSA might have to offer, definitely try this out! If you're one of those pilots who things that the smaller the easier, then you might be surprised what you'll learn in this machine compared to that Cessna or Piper you're flying right now. I'm sure the team at Wanganui AC would be very happy to help you out and I'm also sure that you'll enjoy the experience!

I hadn't seen one of these in a long time. Last photograph was a P3K on the missed approach at Wellington back in December 2013. The last time I got close to one was in March 2012 at the RNZAF 75th anniversary open day/ airshow.

Lockheed P3K2 Orion, NZ4202, operated by the RNZAF. This shows off the MAD* quite nicely!

Lockheed P3K2 Orion, NZ4202, operated by the RNZAF. Shutting down the outer engines

The weather was not exactly conducive towards VFR flying today, but we certainly need the rain after a long period of high temperatures and bright sunshine! Just a couple of pictures this time [although something more exciting coming up very shortly!].