I must be back in Wellington...

... as I'm back to seeing Air NZ and other Wellington visitors.

First up are a couple of regulars.

ZK-OXE has been around for a while now. This is another of Air NZ's Airbus A320-232 aircraft which is used on domestic sectors.

Mount Cook Airline's ATR72's look really nice in the black and white fern livery. We'll see more of these as Air NZ expands it's fleet of later model ATR72's, to replace the older ones and to slightly increase the overall fleet size.
Last up is an Australian-registered aircraft, a Beech B300LW, VH-WCN. This is registered to a company called AVcair of a Hamilton [Queenland, Australia] address. AVcair appears to be a charter operated based in Brisbane, Australia.

Following on from yesterday's first post from Hamburg, here is a look at a few more aircraft.

First up was my ride home. It's a British Airways operated Airbus A319. A nice little workhorse, and a nice airline to fly on [I even got fed and a drink and at a good price].


Air Berlin in a low cost carrier based in Germany [surprise! :-)], which operated by jets and turbo props.
A category of aircraft that seem to be rare at the airports I visit in Europe are turboprops. There are never more than a very small number of them around. Maybe I'm just not visiting secondary airports or maybe they are just not used so much [there are on the other hand a usually a fair few regional jets]. Here are a couple:

More from my recent holiday...

I spent just eight days in Hamburg., Nothing much aviation to report, although I did visit the excellent Miniatur Wunderland (there will be a post on this next week), which includes a large airport section and is apparently based on Hamburg Airport. Well worth the visit if you have a few hours free!

Once at Hamburg airport [ICAO code: EDDH] and after security, there was plenty of opportunity to photograph some of the flying both prior to, and after entering, the "B" gates, which handle non-Schengen area flights.

This post has the first of a two posts covering the happenings at Hamburg airport. There is only one photo of an aircraft on the runway... unfortunately my 55-250 kit lens gets too fuzzy at the 250mm end...

First up is a rather special aircraft - the first Airbus A320 NEO [New Engine Option] in airline service. Note that compared to the other A320's in this post, those engines have a much larger diameter. It's hard to tell from this distance, but there does not appear to be a lot of ground clearance...

Next up is an A320 operated by Aeroflot. If it's registration looks a little odd, that's because it is registered in Bermuda.
This Easyjet aircraft has an interesting livery - one I've not seen on their aircraft before.


There are not too many B757's operating outside of the US and Europe, but this is one of then. Nice to see! This picture shows of the stretch over the -200's used by the RNZAF quite nicely.

I was at Wellington airport yesterday and was in time to see Jetstar's Sunglass Hut-branded Airbus A320 depart. It has to be said that an aircraft can make for a pretty impressive billboard!

After 13 days in the UK, I headed off to Hamburg.

Why Hamburg? Simply, I had never been there before, so it was an opportunity to have a look around.

The flight from Heathrow to Hamburg was a Eurowings flight, operated by Germanwings, both subsidiaries of Lufthansa. Despite being fairly inexpensive, I had a checked bag and food which was nice, even though it was only about a 1 hour, 45 minute flight.

Anyway, here are some photos from Heathrow prior to departure.


One more thing to note is that it seems that for domestic and regional aircraft, Airbus rules the root in Europe. There are Boeing about [and I have not deliberately excluded any], but they appear outnumbered by Airbus by a considerable margin. Long haul might be a bit more even.
Posted by Rodney at Sunday, April 24, 2016 No comments:

For the first time ever, I was flying business class. The first leg was in a Boeing 777 and it's amazing what a difference a flat bed makes for the comfort on the trip! Despite not getting a lot of sleep [that's just me, not an indication of comfort levels], I was still reasonably fresh. Being comfortable, I didn't need to walk around as I do in economy which probably helped a lot also.

The remaining long haul sectors would be in a B787-8, and I was very interested to see what the differences would be - especially the benefit of better cabin pressure and humidity. I did feel better after the B787 flights, I noticed that my mouth and throat did not get dry - it was just more comfortable.

The windows on the B787 were much larger and much easier to look out of from anywhere in the cabin, although the electric blinds are a gimmick. Hopefully the next version of them will actually be dark and therefore useful.

Movie and TV episode selection on the IFE is quite limited, but there's probably enough for most people. Personally, I don't care as I don't watch a lot of movies. I think I managed 1 full movie per sector, plus a couple of shows. I prefer to try and rest, which is very easy when you get to lie flat!

Food was nice. There's not a lot of menu options to choose from [that is, two for each of breakfast and the main meal], but the meals themselves were nice. Alcohol options were also limited but tasty - no problem as I don't drink much [except water and fruit juices] on planes anyway.

Overall, service levels were a bit variable, but the staff were all friendly and helpful. The only annoying thing was on the flight from Guangzhou to Auckland, one of the staff told me to turn off my mobile. Yes, it was in flight mode [I showed her this], and I was told "I understand but you must turn it off". I don't know if there was something missing in translation, but nothing I would have an argument about.

Keep in mind I paid half of what you would pay to fly Air NZ, Emirates or similar, so little things like the food and slightly inconsistent service levels are nothing. In any case, I purchased the ticket for comfort, not food :-)

The biggest benefits of a business class ticket? The lie-flat bed, plus lounges at all stops and priority queuing.

Anyway, on to some pictures. These are a few from Guangzhou. There are not that many - I spent most of the time in the lounge and only took a couple of walks to stretch the legs and get some photos. Also, they were shot through glass, so they are not all that great...


PS: I'm still a little tired, so this post will probably get updated as I re-read it :-)
Posted by Rodney at Saturday, April 23, 2016 No comments:

It has been a looooooong time between posts, but I am back.

I have just had four weeks holiday overseas [UK and Germany] and I haven't been in the mood to sit in front of a computer and create posts in that time. Now I'm back, there will be a week or two of catch ups :-)

While I get some catch up posts organised, here are a few sample images from the trip.

First up is a view of the cabin view on the Auckland [NZAA] to Guangzhou, China [ZGGG] leg. Yep, business class in a B777. The other three long haul legs were also business class, but in the B787-8. More on that later! 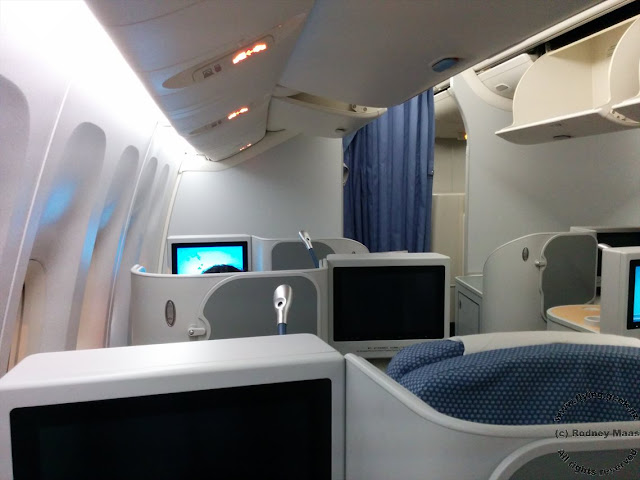 Next up are pictures from two of the airports I visited - Guangzhou [ZGGG] then Heathrow [EGLL].