This past week has been a fun and busy time.

From last Tuesday I was in Tauranga [NZTG] for the annual Flying NZ National Championships and this year, it included the International Wings Trophy competition between New Zealand and Australian teams.

The original plan had me flying the Nanchang up on Tuesday, but with awful weather, that was scrubbed in favour of me buying an Air NZ ticket. I can confirm that it is very very expensive to buy a regional ticket for same-day travel, but beggars can't be choosers and I did have air points, so it was slightly less painful. I also made use of one of my lounge passes to have a feed and a drink before departing.

Our other two aircraft [Cessna 172N, ZK-EKE and Piper PA38-112 Tomahawk, ZK-WAC] were similarly delayed, but they were able to fly up on Wednesday which was good.


The event itself was a large one with competitions from Wednesday until Saturday and the presentation dinner on Saturday evening.

In addition to the Wings team from Australia, there were competitors from Whenuapai [north Auckland area] down to Timaru, many of whom flew their aircraft in. Unfortunately, as I was both helping on the official side and competing, I didn't take a lot of photos. The following two show a tiny proportion of the registered aircraft.


As much as it is a serious event, there is also a lot of fun. I haven't heard of any mascots being stolen this year, but there was a pirate flag raised between the Australian and New Zealand flags... the words say "Rebel 'til I die". I'm not saying who put that up [but wasn't me!]. 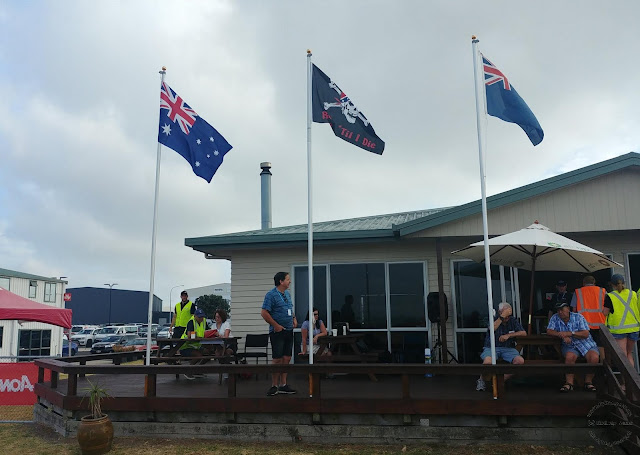 Anyway, it was a busy week. the next post will cover what I got up to during the week, and the third post a couple of key results. The last post will have a couple of very interesting aircraft you may not have seen before.